HOW TO CREATE A GARDEN STYLE DINING SPACE 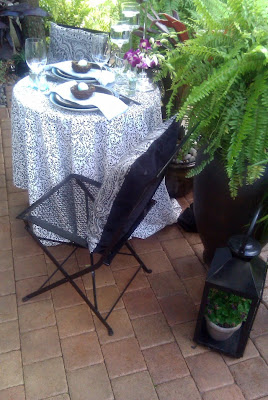 Creating a garden style dining space (whether inside or out) doesn't have to cost much: It's just creatively using what you already have. When I was gathering the elements from around my house to make an Easter table setting, I started with the table, but tried to keep in mind the space around it. I gathered my finds on the table, looking at their textures, colors, and finishes and then started playing. 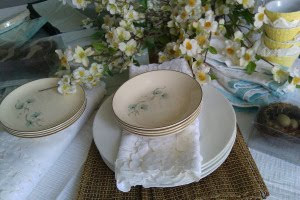 Although had these woven matts and didn't use,
their texture inspired another element: the trellis.
This time, I used a white on white basket-stitched cloth (which it's original purpose when purchased on clearance was to re-upholster the chairs with). To make the space feel light and airy for spring, I covered the dark wood of the table and chairs, leaving only its' legs exposed. 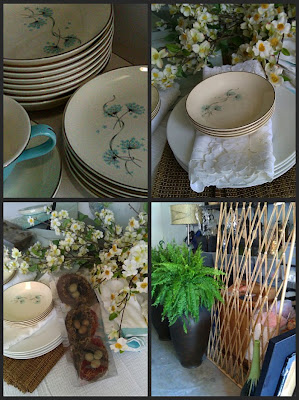 I pulled over some of the white blossoms from the living room, and used a solid white vase for the centerpiece. Layering the table began with runners on top of the cloth, with another layer of a delicately stitched placemat: both positioned across the width of the table. I didn't have the right style or color charger, so none was used this time. But I did have a thrift store find of petite dessert plates & bowls with a dandelion pattern (found back in February for only .50 ea.). 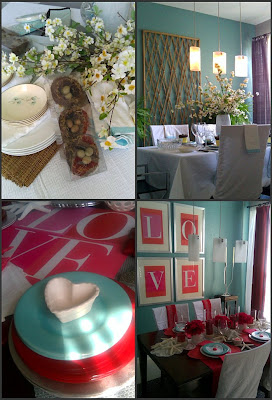 The printed plate needed a little something. So to pick up on the wall color (Ralph Lauren Emperor) I used the turquoise dishes I had used for Valentines. I found the plates at Target about 4 years ago for about $12 for the set of 4. Since the whites were different, the turq break worked great. 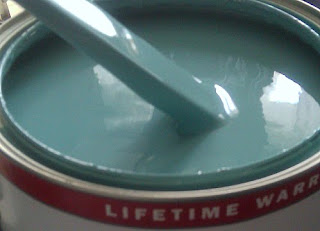 Ralph Lauren paint
Vintage Masters Emperor in eggshell finish (VM126)
(found at Home Depot for half off back in January)
Yellow basket styled ramekins (found at Crate & Barrel, also about four years ago) worked to hold the tiny birds nests (found at Marshalls, also four years ago, for only $6 for the pack of three). The natural & dark texture of the nests worked to give a little break to all the white. Now it needed shine...

To add shine, kept it simple and just added clear glass pieces (rather than silver: saving silver for a coastal-scape) Although it was coming together, the space still needed something. A FOCAL POINT. I was originally trying to reuse the frames with new art, but then I remembered that steal of a deal I found at Target last weekend: the trellis (a $50 trellis found on clearance for only $10). 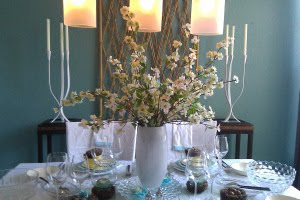 Originally planned to be used on the patio, the trellis worked great to give a "garden style" to the dining room, create a focal point, and switch-out existing wall art for new element. Leaving the bamboo in its natural color tied into the centers of the flowers and the basket styled ramekins (although I did want to refinish the trellis in espresso or white). It's almost there, but why not add one more element? 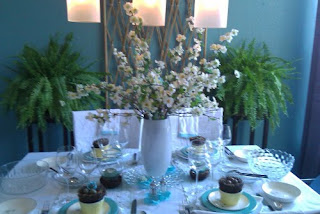 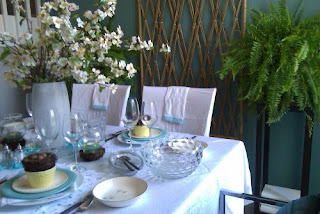 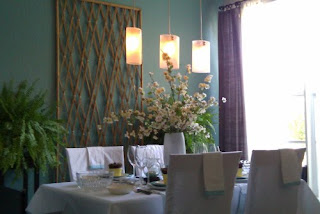 I used the plant stands AS plant-stands (from Peir1 about five years ago). I brought inside the ferns from the patio (also found last weekend when getting some plants to refresh for Spring). These are Boston ferns (sorry Yanks!!) found at Lowes for only $7 ea. 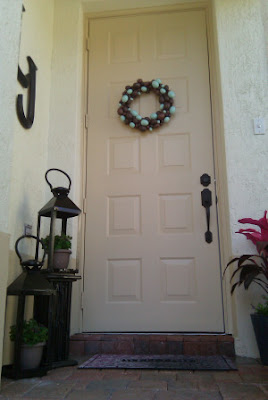 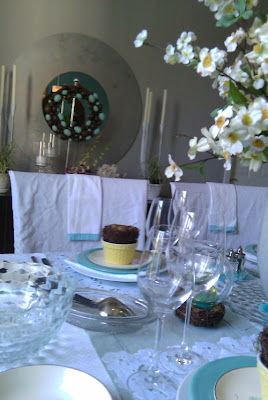 I brought in the wreath from the front door, and finally got to use a wreath stand I found at ZGallery (on clearance for $5) about two years ago (since it didn't sell at garage sale in November, it came in handy for the buffet.)  Replaced two buffet lamps for two more plants, in white plant containers (I had painted & used at Holiday for mini-trees). 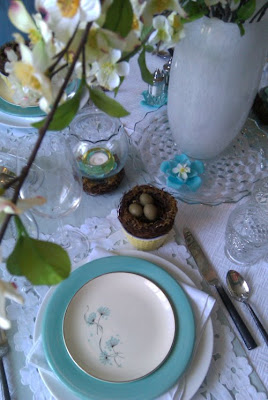 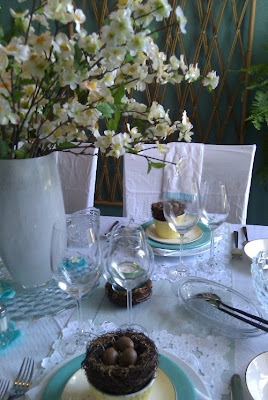 Although I enjoyed setting the dining room for our traditional Easter dinner, my mom was unable to make it. No problem.... just took it outside and made a garden dining bistro style for two. 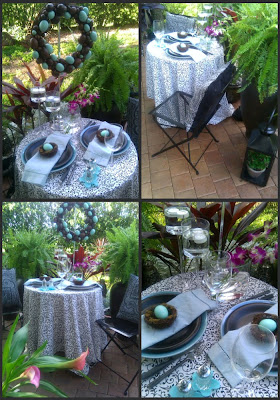 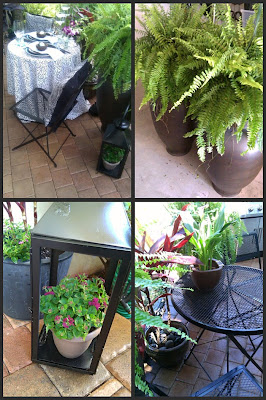 And here's two more garden style settings I've made in our home: One was for Mothers Day (too hot that day to be outside) and one was for a barbeque (before we had the patio) ... 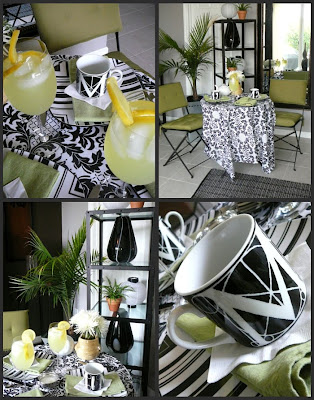 One Mother's Day, I utilized my souvenir mugs from NYC's Metropolitan Museum, added green cushions to the bistro set, brought in a palm tree and eteger and served well chilled lemonade with brunch. 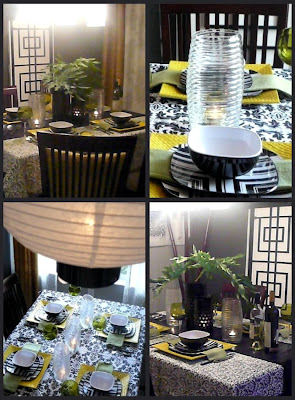 Fresh cut greens made the centerpiece for this scape for $0.
So when setting the table or dining space for a Spring gathering, why not bring some of the outdoors inside (or even the inside out)? 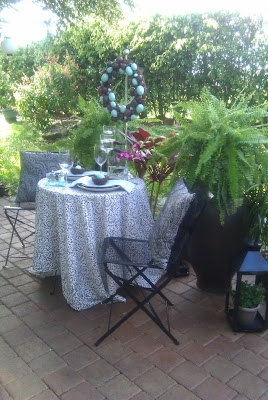 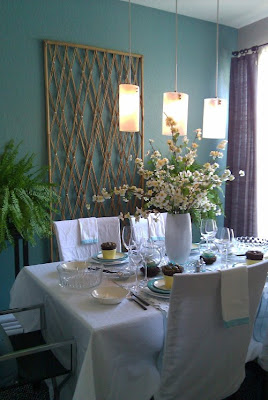 What are some things you do to bring the outdoors in?
Hope you're having a wonderful Monday...
Lynda
Posted by LYNDA QUINTERO-DAVIDS at 10:08 AM

Email ThisBlogThis!Share to TwitterShare to FacebookShare to Pinterest
Labels: Easter Tablescape, Garden Dining Space, Ralph Lauren paint, Refresh, renew, Tablescapes
LYNDA QUINTERO-DAVIDS
Hello and Welcome to Focal Point Styling! I'm Lynda - sharing simple solutions to style & organize your home, fashion & decor trends, savvy shopping tips, market events, plus local love from the places I've experienced. I started this blog back in late 2009 when I lived in Miami. In 2011, I moved to Phoenix, AZ and rented a house until late 2014, when I relocated back east to the Triad in North Carolina - Join me on my journey!