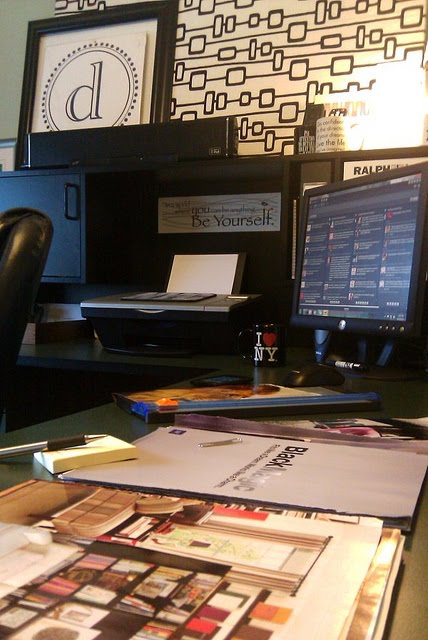 It's a NEW week - and also the countdown to a few days until September. Along with a few Fall-Fix-Up's happening around the house, last week I had taken some time to rework some of the office. Even though I have a few "Tidy-Up Tuesday's" throughout the year, filling bills and dusting, sometimes the bookshelves just need a revamp. When we first moved here, this space was our home office (and a not so nice mustard faux wash) - but during the past several months it's become Blog Central or what I am now calling, "The Think Tank". 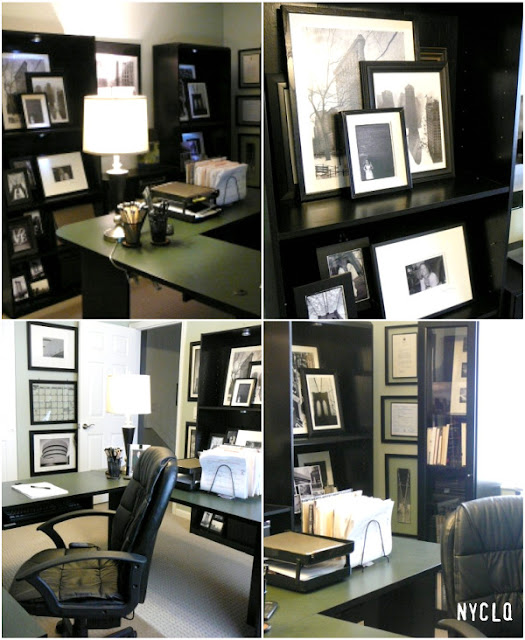 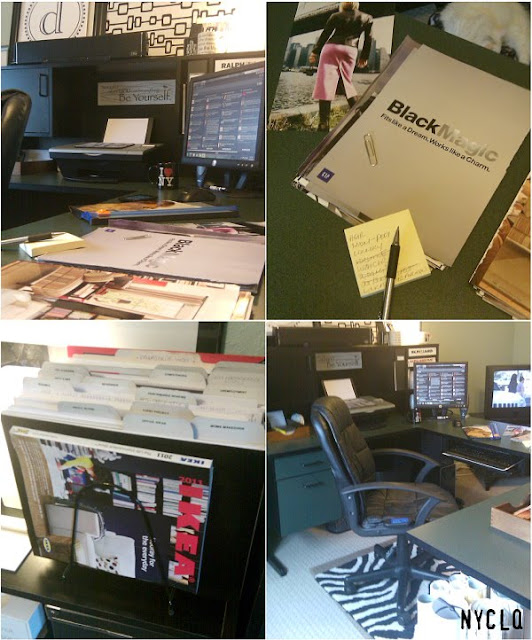 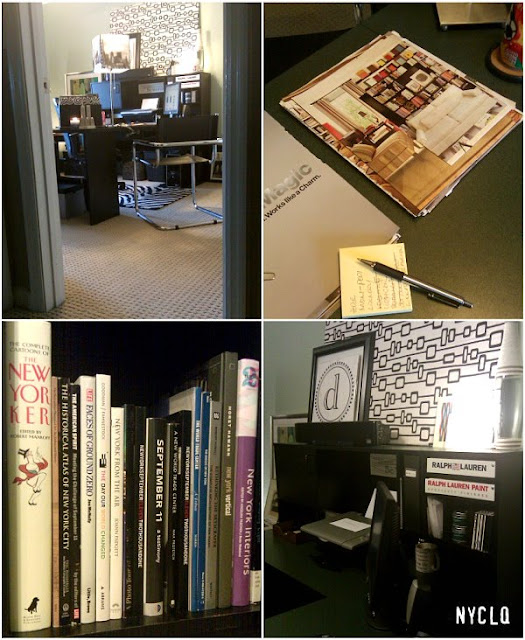 Blogging Think Tank - 2010
When I first set up this space as our home office, it was more filled with a collection of photos of us and pics of New York. Since this is the Think Tank - the shelves have become more filled with blogging sources - books, magazines, clippings, and newspapers. All camera needs are boxed and labeled. I was even able to utilize the space under the desk for my art supply drawers (pencils, markers, templates, extra idea drawer), as well as tuck rolled prints and posters at the desk end (both of which were previously in my old office). 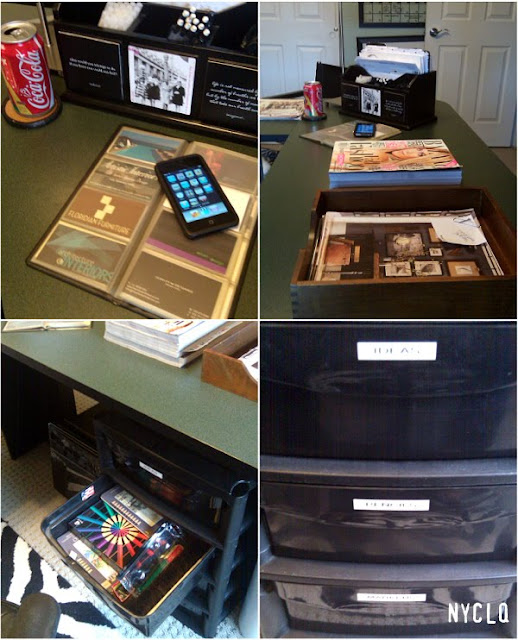 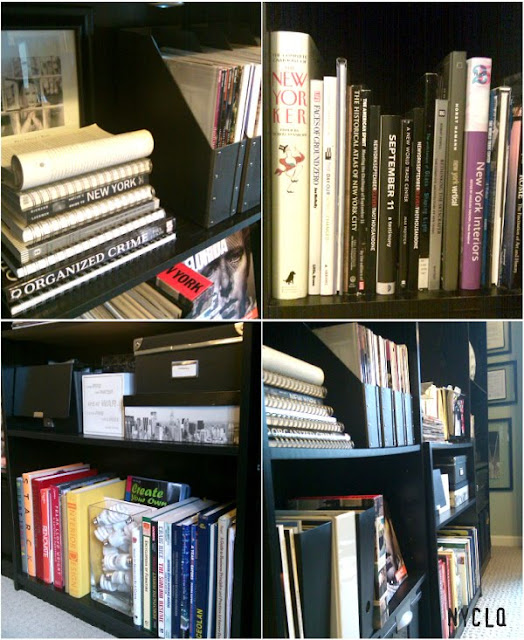 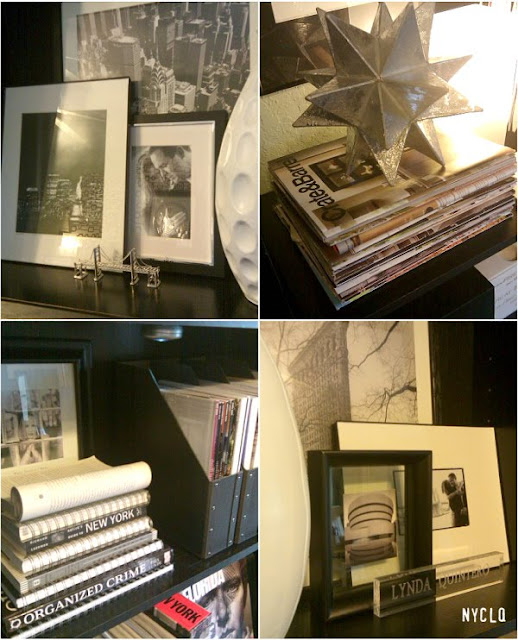 All but two of the bookcases (one tall and one short on long wall) have been with me since I lived at home. The two towers worked on either side of the window with storage ottomans in between them and work as a window seat. The three storage ottomans hold photo albums and frames.

The two black tables in the space are both from my old apartment. The TV table was a gift from a friend & hair stylist (and has extra storage under the TV for more boxes of photos. The other small black table was a $8 thrift find several years ago. It was originally blonde - I painted the legs black and stained the top with Old English furniture polish. It works great as a newspaper source station. The black leather drawers under it are where ALL the manuals are for everything in the house (the go to spot for troubleshooting). 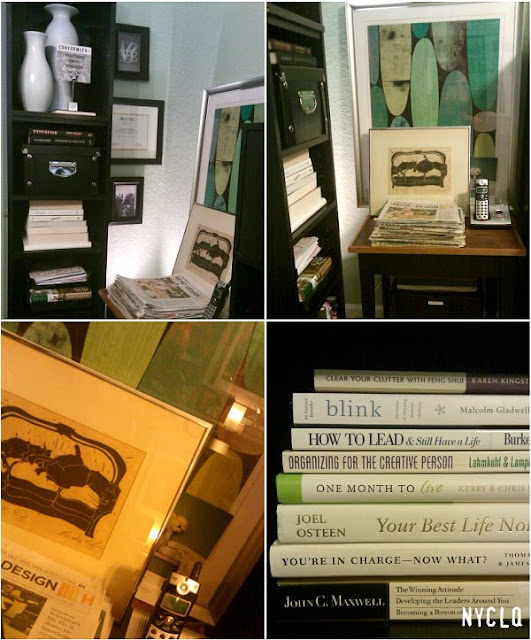 Thrift table & artwork added some personality to the space. 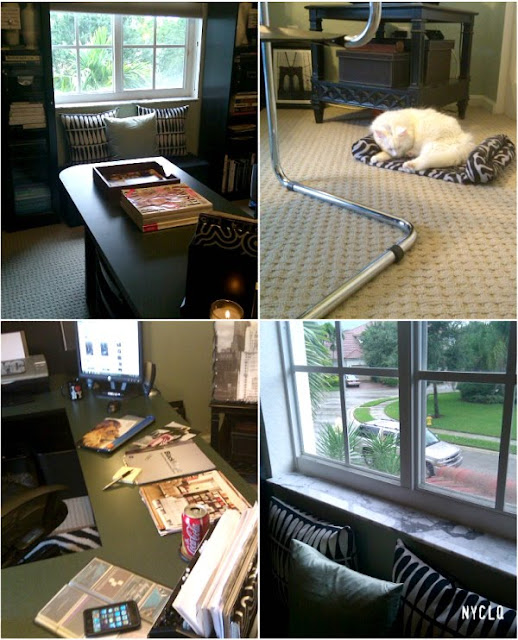 Sephora loves to lounge or perch up in the window. 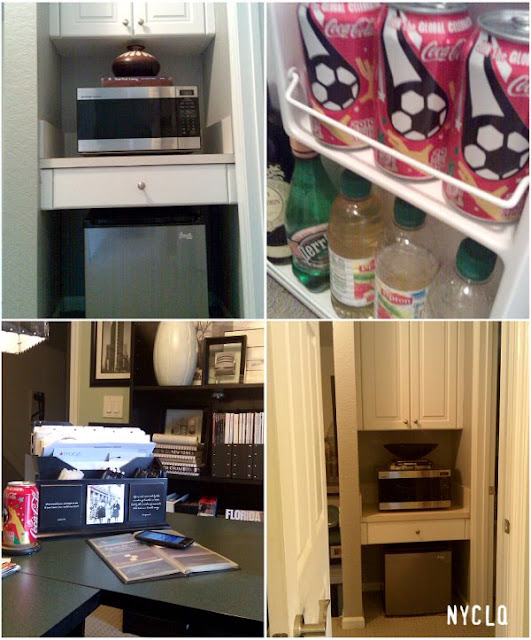 Utilized hallway built-in computer desk
as a beverage (caffeine) center upstairs.
The desk Jeff has had for a while, and we both really like all the surface space it gives us to work with while on the computer & watching TV. The ipod bar sitting on the top ledge I got him for Christmas about two years ago when I got him an ipod. The B&W piece leaning behind the ipod bar I want to make into an Inspiration Board. The "d" I found at Marshall's (on clearance for only $2) and I'm still deciding whether to mount it in the black frame - or - adhere it to a medium sized round mirror I found (for only $6) while thrifting. 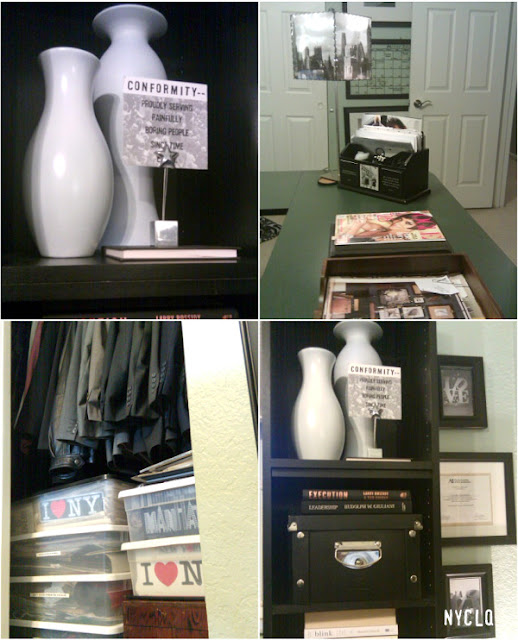 Office closet - storage for seasonal clothes, coats, and Jeff's suits. Three totes filled with September 11th memorabilia, one for gift wrap, one for scrap booking (which I really haven't gotten into) and one for all those annoying extra wires that come with electrical equipment - and you can never find one when you need it... 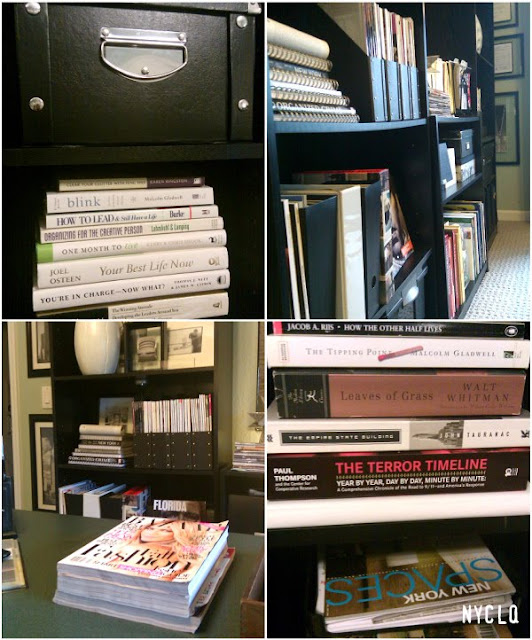 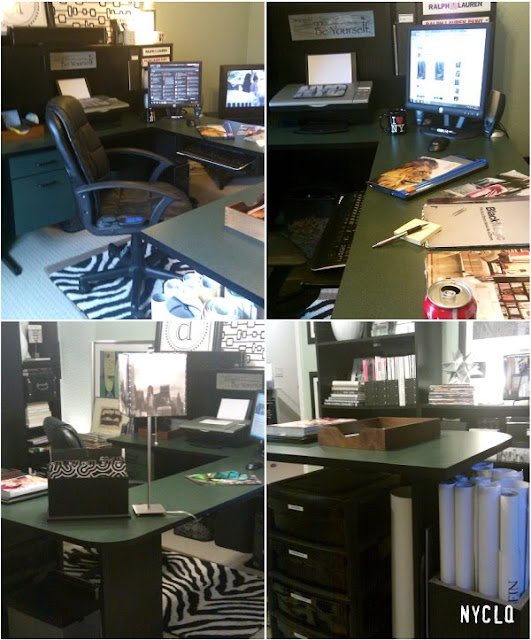 Although we received our new computer last week, they sent the wrong monitor. New one will be 20" and easier to read for this blind old bat... lol
Since I'm sharing this post at a NEW link party I found last week at Centsational Girl called "Where Do You Blog?", it's also to include why I started blogging. Why I started can actually be read in a featured interview from Friday over at Modern Bird Studios.

Since beginning to blog, it has been an amazing and totally new way to be creative (after working in retail for twenty five years). I've able to learn so much from the Internet and other bloggers. I've also gotten to meet so many more creative and talented people that I would have never met had I still be in the same brick & mortar box. I've also been able to learn more and discover the place I'm at - Miami. I've enjoyed having the opportunity to "throw myself out into the universe" and I have also enjoyed being recognized as more than just a shop girl. 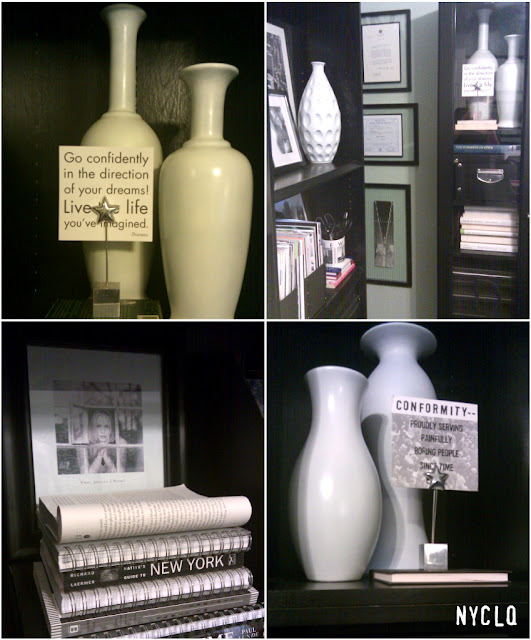 Added in some white vases (previously downstairs in the living room)
to help break the black. 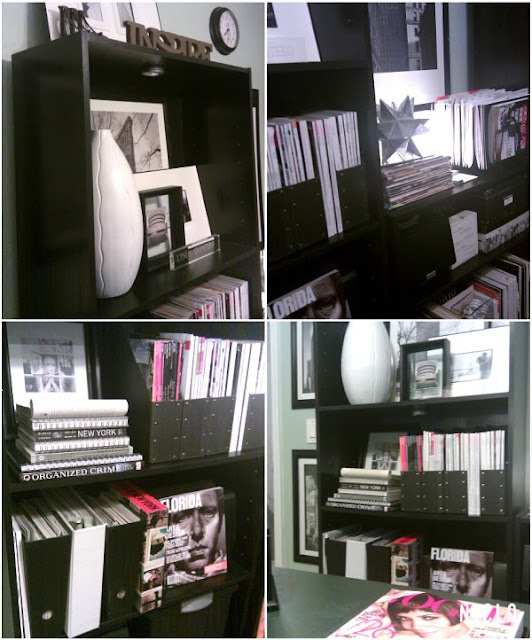 Here's a quick look back at the office space changes since blogging -The office has transformed from looking like a staged home to a comfy cocoon to blog in... 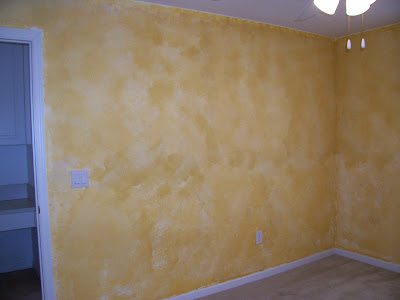 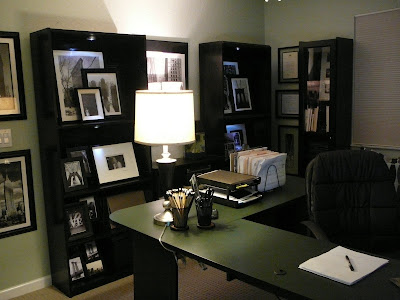 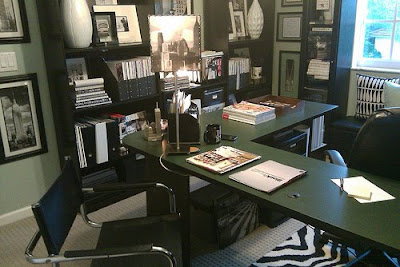 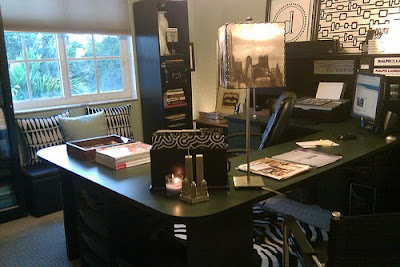 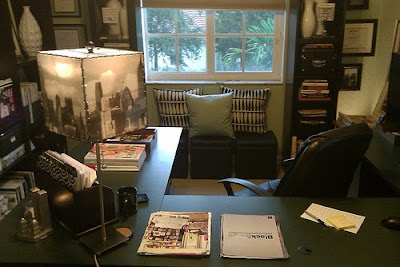 and the new
Centsational Girl - Where do you blog? Party

Posted by LYNDA QUINTERO-DAVIDS at 3:58 PM

Email ThisBlogThis!Share to TwitterShare to FacebookShare to Pinterest
Labels: Blogger interview, blogging, BNOTP, Centsational Girl, home office, home organizing, link parties, The DIY Showoff
LYNDA QUINTERO-DAVIDS
Hello and Welcome to Focal Point Styling! I'm Lynda - sharing simple solutions to style & organize your home, fashion & decor trends, savvy shopping tips, market events, plus local love from the places I've experienced. I started this blog back in late 2009 when I lived in Miami. In 2011, I moved to Phoenix, AZ and rented a house until late 2014, when I relocated back east to the Triad in North Carolina - Join me on my journey!