Transforming A Water Garden Into A Rock Garden

In addition to some much needed exterior attention out front of Harmon House, we've also been doing some maintenance in the back yard and for the deck during the Spring. Even a quick de-weeding has helped to transform an eyesore Jeff had originally wanted to rip out, and now he likes (go figure?). He likes it so much now, he even came home Saturday with a solar powered spotlight for this new garden.  The previous owners had a duel-pond water feature, I thought could be saved, or converted into something else, like a rock garden. So the Sunday after we had mulched the front yard, we came to the back yard, and just started pulling weeds from the eyesore (I even saw my first snake!). I already had a few colored flowering plants I had thought I would use by the potter's shed, but instead, I put them to better use for this previous water feature transformation. As we pulled the weeds, I took a step back to visualize what this garden feature could be. Jeff had commented he didn't care for the two red stepping stones, so I first removed them, and brought those over to his herb / vegetable garden.


Cleaning Up - Before & After 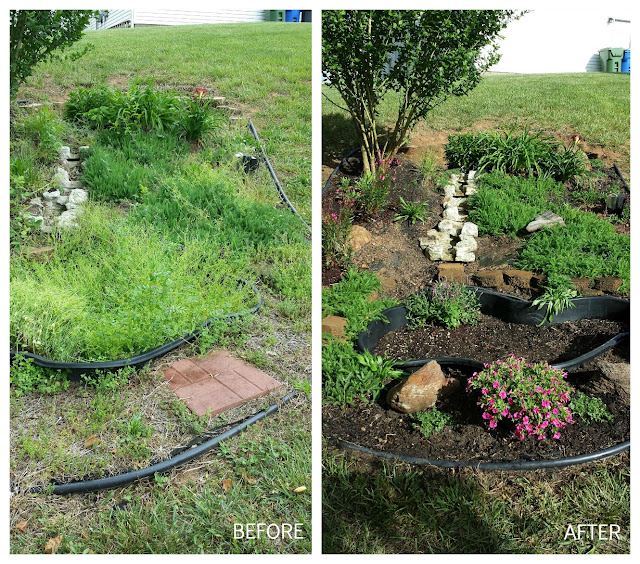 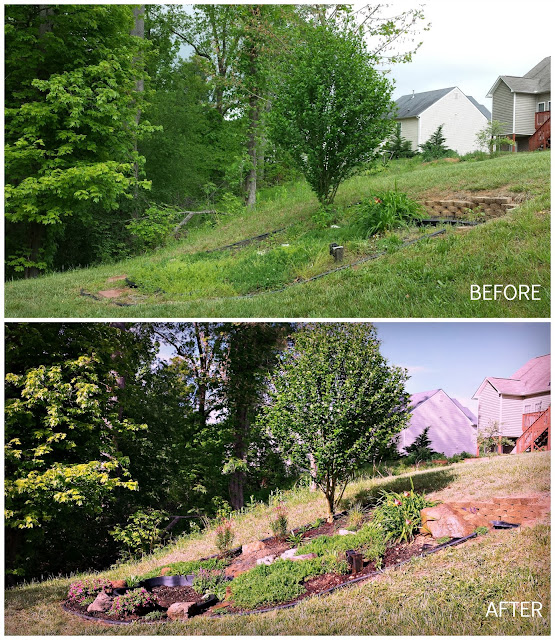 The front curve of the space looked like a great place for some small boulders, which I already have from our Florida townhouse garden (Movers aren't suppose to move rocks and plants, but we packed these into boxes ourselves, and they didn't see them - from FL to AZ and from AZ to NC!) This was also a way I could bring my interior styling of reusing existing pieces, and even telling our home story, now into the (rock) garden. 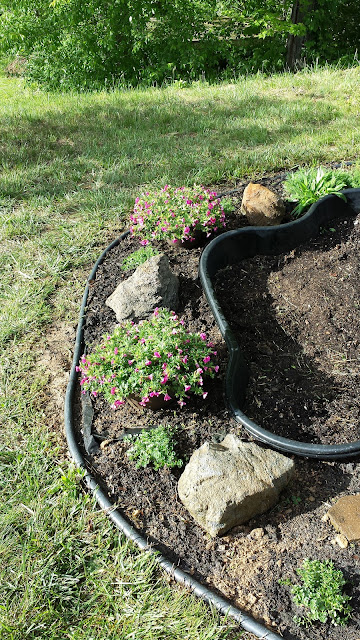 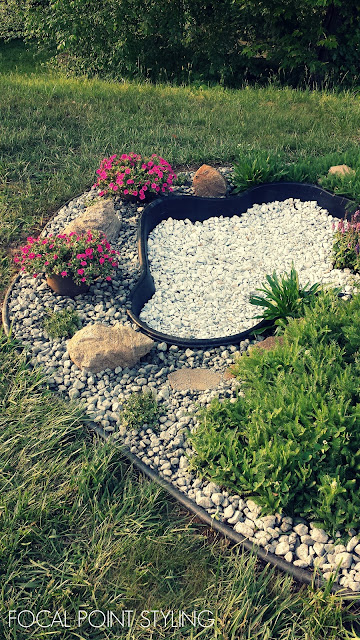 Back in April (for Easter), Jeff had brought home two pink flowering hanging baskets (I think they are called morning glories). I cut off the plant hanger straps, and I had set them out front for Easter, but since I wanted the front yard to just be crisp greens & white, I brought them to the rock garden, placing them in between the Florida small boulders. But before adding rock ground cover, the space still needed something else - More GREEN - So I brought over some ground covering plants I had picked up at Lowe's (originally I thought I was also going to use out the front). 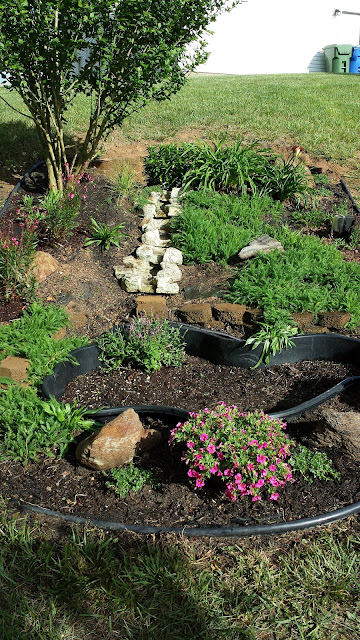 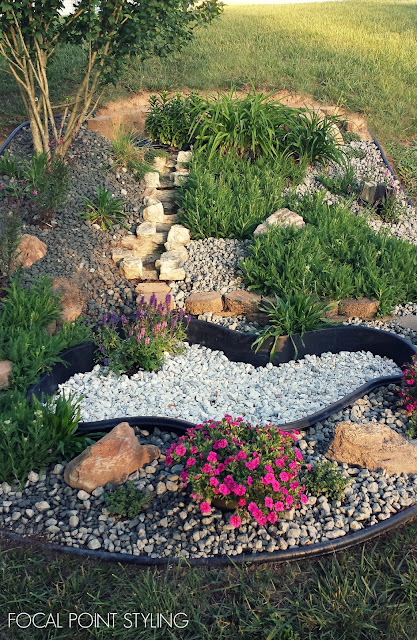 Jeff cut the ground-cover barrier with a spade, and I planted the green ground covering. One of our  neighbors, who had complimented us earlier on the difference we were making out front, came over to see what we were up to now (he is also the HOA President) - and told us about how the water feature often got clogged, backed, up, and how he had killed 6 snakes between our yards last year (but none since we've cleaned up!) When I said we were turning it into a rock garden, he said there were some big boulders down the hill, if I wanted, he could get. So off him and Jeff went, down the hill, into the wild greens and thanks to a wheel barrow the neighbor had, together they brought up this HUGE boulder. Now we have a NC rock to go with our FL rocks :) 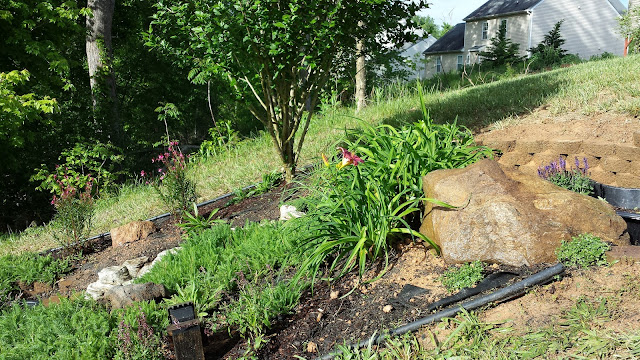 Rather than tear out the pools, I planned those for simple white marble chip rocks (I used to use in FL and AZ), but for the main coverage, I wanted something different. I saw peach pea gravel and something similar to Jersey shore stones, but I didn't like them for this (I wanted to stay neutral) so I selected a drainage rock that is grey, and hey, it was on sale at Lowe's! Since we don't own a wheel barrow (yet!) Jeff just backed the truck down to the garden to unload (and help save our backs!!) 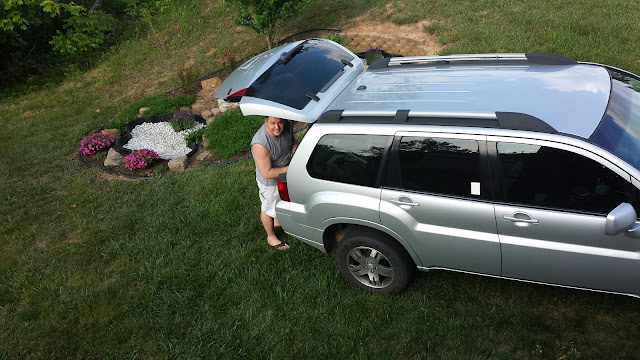 He placed the bags and unloaded - I helped spread the coverage, only to find out, of course, we needed a few more bags. Eventually, I'd like to add two clay kettle-like pot / planters, similar to what I had in Florida, along with a contrasting medium sized rock boarder, and maybe even a Japanese Maple for color contrast. But for now, just this minimal clean-up and TLC made a huge difference to a back yard eye sore (for the neighbors too!!)The new garden we made, including a few existing plantings we did leave, is really enjoying the TLC because now it's blooming like crazy! So much nicer to look at from the deck in the morning, or the kitchen window, and even for the neighborhood walkers, because this can be seen from the road. 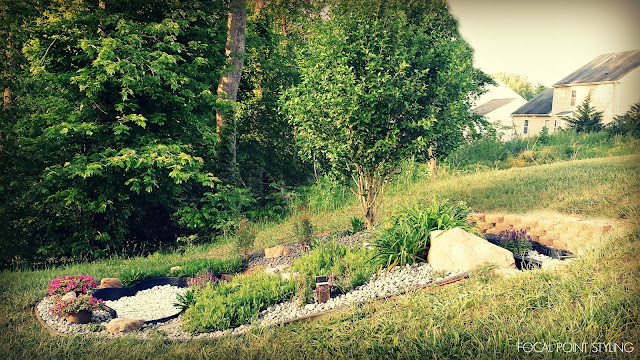 For the medium sized rock boarder, I visited a local landscape yard called Preferred lawn & Garden, who sells and delivers scoop loads of gravel rocks, brick chips, boarder rocks, and even mulch (good to know for next Spring!) The boarder rock I liked is called Rip Rap Rock - a grey, black / white speckled rock, I'd like to mix with some black granite rocks, striped with white quartz - but, that will be for new Spring (or maybe the Fall). 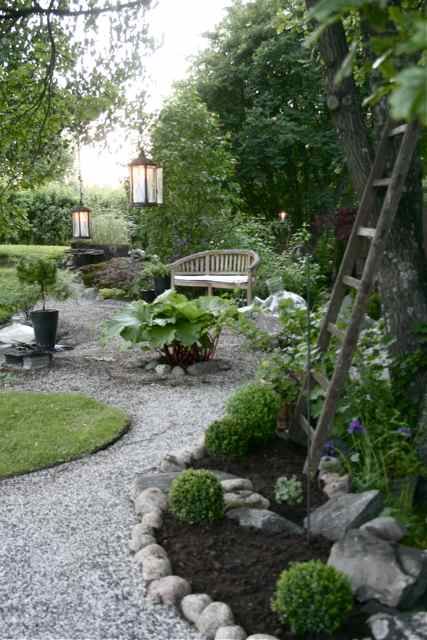 Along the lines of what the old water garden can look like, transformed into a rock garden in the back yard... See more of this beautiful garden at tradgardsflow.blogspot 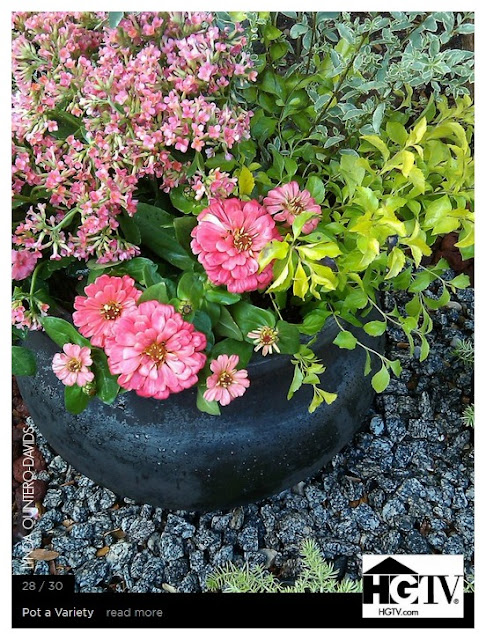 My container garden I did at our FL townhouse, featured at HGTV.com's
Small Garden Ideas (image 28/30) 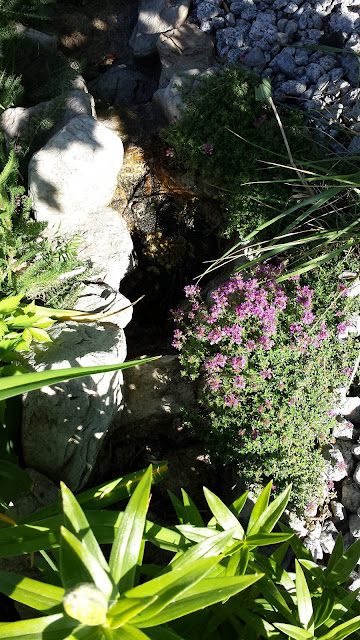 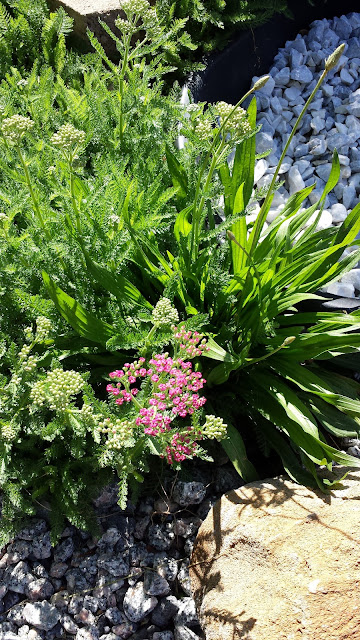 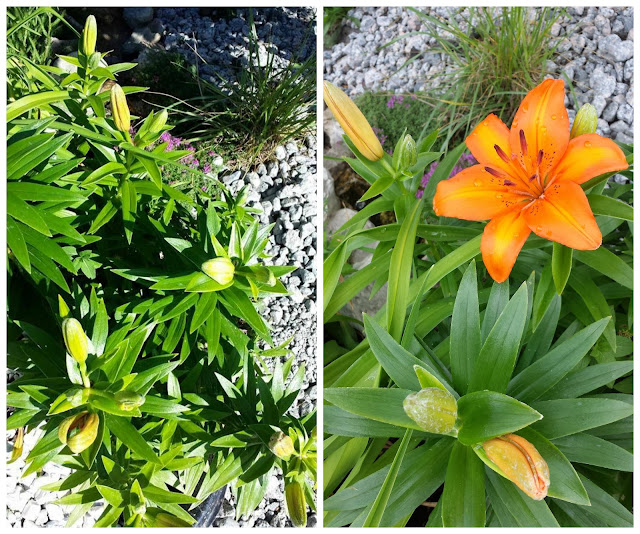 In the morning, I've been watering the plants, and each day, there is a new bloom...
Although I'd prefer shades of purple, these lilies are still much prettier than looking at weeds - Pacing ourselves, I can replace these next Spring (and maybe pot them to give to a neighbor I saw who has orange in their garden). 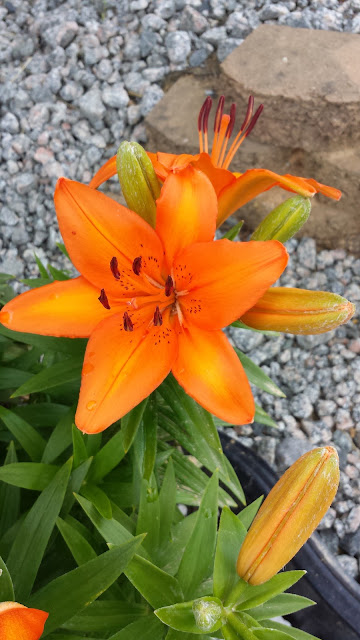 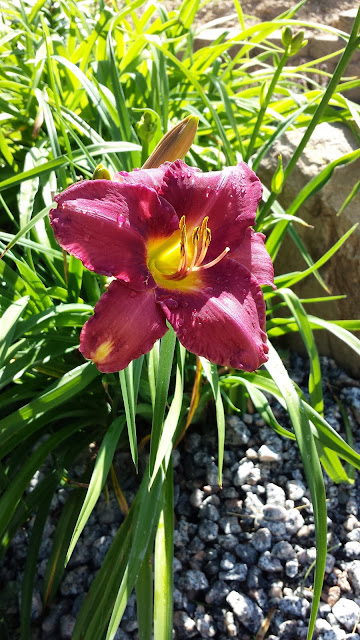 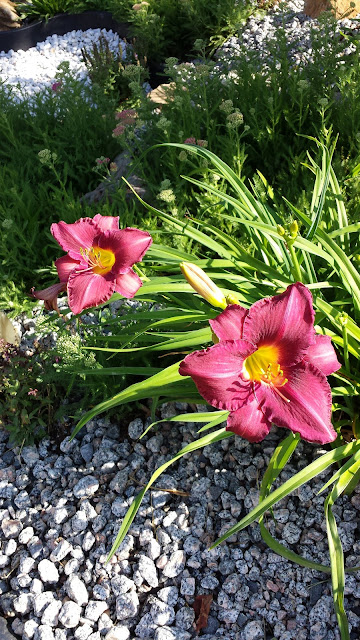 For right now, the rock garden transformation was a minimal expense (under $100) including: 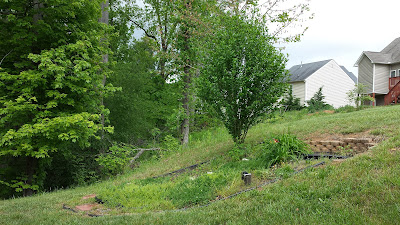 Eyesore Before
I wish the hibiscus would bloom, but it's not really meant for this zone. Hibiscus are more tropical (I'd see them like crazy in Florida - but here in NC, the temps drop well below 40, and they don't like being in those cold temps - especially the snow). But at least it did come back with green life. Transforming the water garden into a rock garden means less mosquitoes (and other critters + maintenance) and I'd imagine, a savings on the electric bill as well. 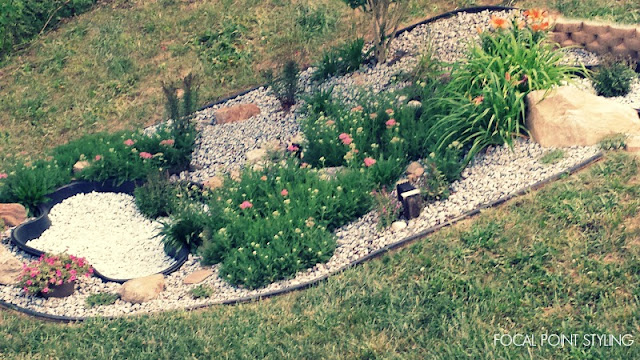 Stay tuned for more outdoor living and Harmon House makeovers!
Thanks for stopping by!

Posted by LYNDA QUINTERO-DAVIDS at 11:00 AM

Email ThisBlogThis!Share to TwitterShare to FacebookShare to Pinterest
Labels: DIY, Garden Design, Gardening, gardening by the yard, Harmon House, landscaping, rock garden, small budget solution, Spring Gardening
LYNDA QUINTERO-DAVIDS
Hello and Welcome to Focal Point Styling! I'm Lynda - sharing simple solutions to style & organize your home, fashion & decor trends, savvy shopping tips, market events, plus local love from the places I've experienced. I started this blog back in late 2009 when I lived in Miami. In 2011, I moved to Phoenix, AZ and rented a house until late 2014, when I relocated back east to the Triad in North Carolina - Join me on my journey!