I still consider myself a 'newbie' to living in Phoenix, so attending an event such as Modern Phoenix Week is a great way to learn the history of the area plus also meet more like minded people in the design industry. One of the many events happening during Modern Phoenix Week is a tour of a Mid Century Phoenix icon: the Hotel Valley Ho. Touring the Valley Ho was a wonderful means of taking in some of Arizona's young urban history, along with a few surprises. I had no idea just how popular the hotel was as a premiere resort to Hollywood stars, including Natale Wood, Robert Wagner and even Sinatra! The hotel was also a rest-stop for stewardesses and pilots, a refuge for iconic baseball players - Joe DiMaggio and Ted Williams - during Spring training, and even temporary housing for corporate execs, such as Motorola, who was establishing their headquarters here in Arizona during the 50's and 60's.

The iconic Hotel Valley Ho was originally owned & built by Robert and Evelyn Foehl. True minimalists at heart, the Foehl's commissioned local Architect Edward L. Varney to design the minimalist mecca. Varney was a former student of Frank Lloyd Wright, and when touring the hotel, I could immediately see the Wright influences in design: the compression & release entryways into spaces, the use of cantilever overhangs on the lateral structures, and the stylized arrow motifs applied to the design of the concrete columns, metal stair railing and combined metal + concrete modern balcony balustrades. 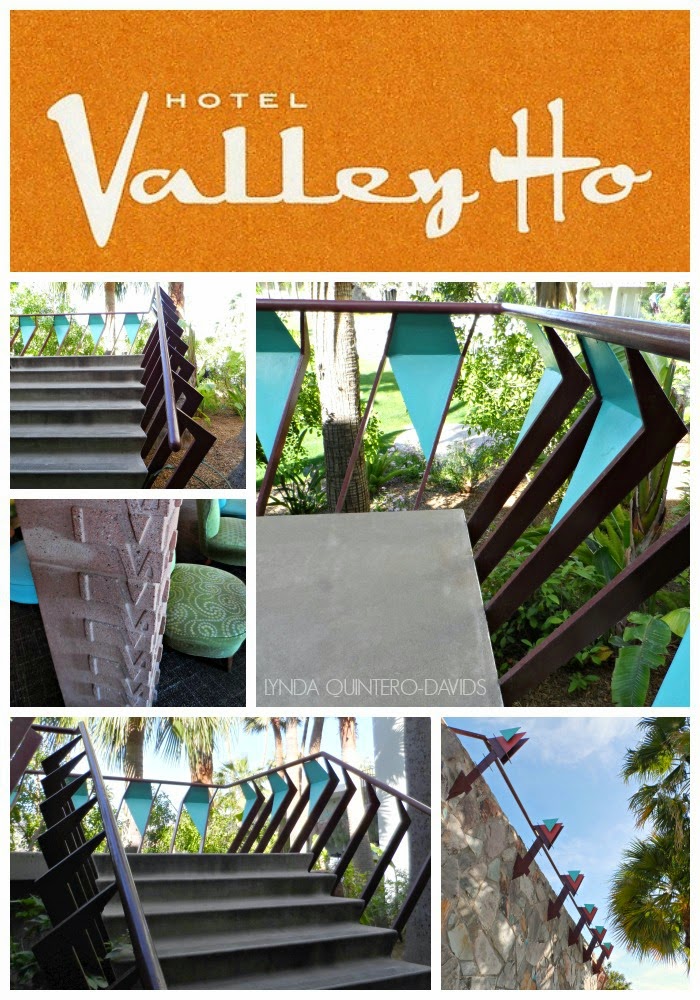 
The informative and fun tour of the hotel I took part in on Saturday was lead by Ace Bailey, the Hotel Valley Ho's concierges and maven for Valley Arts. Ace shared her historic stories with joy, enthusiasm and dedication to her love for mid century design. From Ace I learned how in 1973, Evelyn Foehl had sold the Valley Ho to Ramada (after her husband Robert had passed away). Needless to say, during the time Ramada owned operated the hotel, they destroyed interior. In 2002, Ramada sold the hotel, but it entered a bidding war - which actually resulted in saving the structure in the eleventh hour from being demolished and turning into a condominium. In 2002, the hotel was bought by Westroc Hotels & Resorts and underwent a renovation, which was completed in 2005. Conceived anew by the architectural firm Allen+Philp, many details were able to be grandfathered in to refurbish the hotel to its former glory. The difference between the old and the new were the new additions couldn't be constructed with same materials - only similar to create the seamless flow from the old to new. One prime example of this is within the lobby entry of the hotel: the actual metal framed glass entry doors are original, but the glass facade and doors directly next to the entry, leading to the outdoor smoking patio, are new. However looking at them side by side, you'd never know, until it was pointed out. 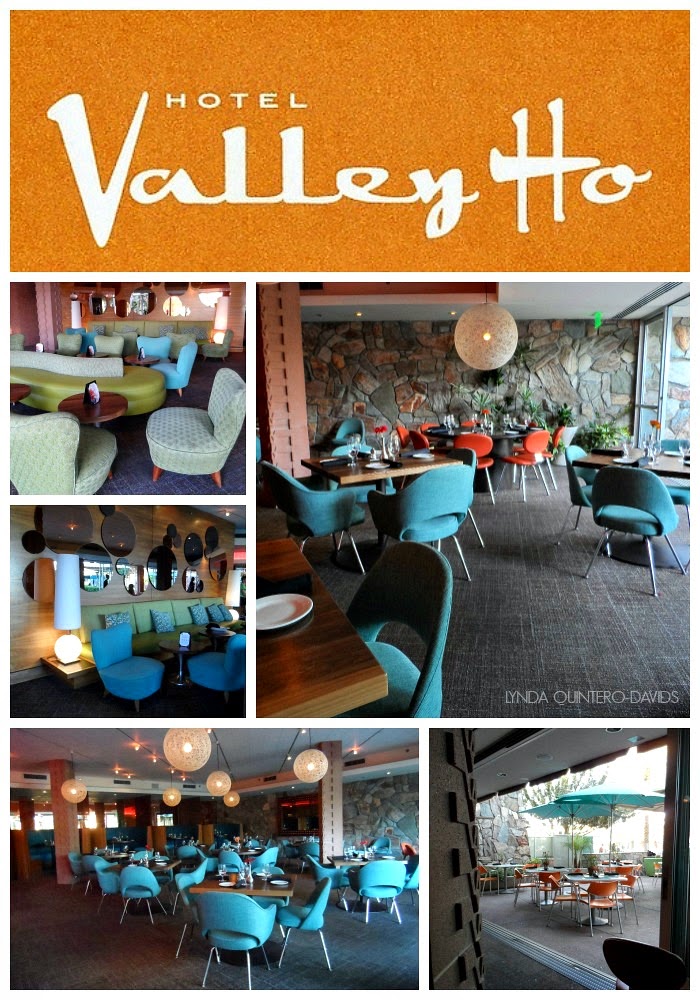 Since Ramada had remodeled the interiors, they also had done away with most all of the furniture. All of the furniture today is new, however it's designed in the clean lines, finishes, patterns and colors of the mid century for renewed period style. All of the rooms always had B&W carpet, which was changed periodically and now the wall-to-wall carpet has been converted to carpet FLOR tiles + conglomerate B&W tile to mimic terrazzo flooring of the period. 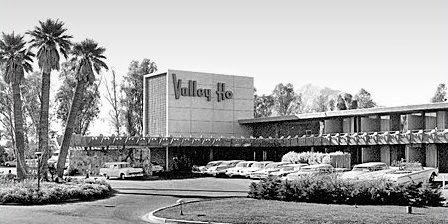 Valley Ho is the most mid century modern period restored Hotel in the US. When it was originally built, it was built without the tower - the elevations were only two levels, BUT it was constructed with a basement below with the foresight to build the "Tower" in the future. Since this "Tower" structure was grandfathered in, it enabled the "Tower" to be built, regardless of the Scottsdale zoning height restrictions (blocking the view of Camelback mountain). 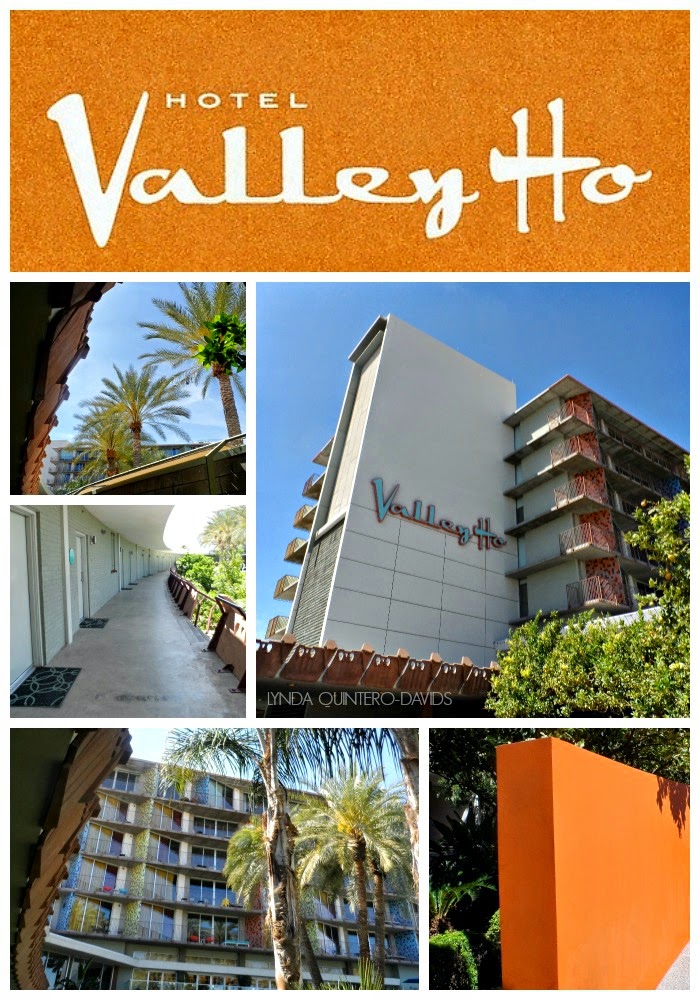 New paint of today, created in period colors of yesterday.

Scottsdale's Main Street ends at the hotel - while a main artery street, Indian School, was redesigned as a six lane street, and shifted to be closer to the hotel as Phoenix - Scottsdale grew and developed. 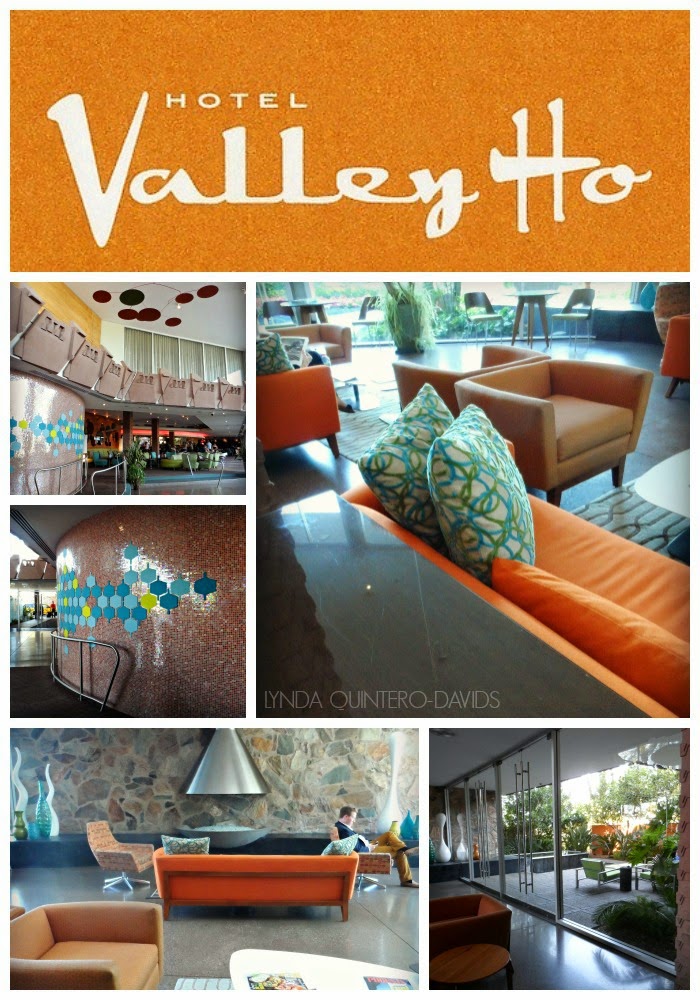 
New additions changes are subtle, and are built to code standards (for example: changes in stair rails + rise). Green construction was applied whenever possible: For ex: the period style fireplace was added to the lobby during 2002 renovation, and it is lit with treated tempered glass - original glass from the hotel which broke during the renovation. One of the features that was able to be recast to original were the arrow-stylized columns, which Ramada had covered in mirror in the 80s (ugh! Can you imagine??) 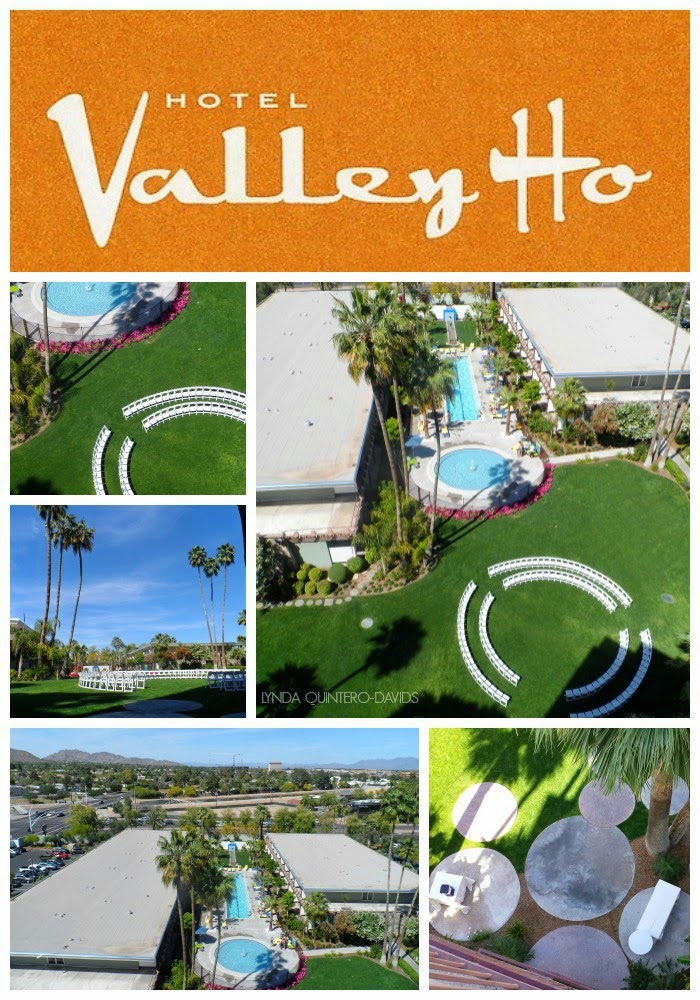 
Valley Ho was the Paparazzi getaway for Hollywood icons (staying in Palm Springs), and also became one of the two wedding destinations of Natalie Wood and Robert Wagner. Since the hotel doesn't belong to a major chain, it still has a family owned atmosphere, including to this day, a "guest "list" that remains Private. One of the hat faves of Sinatra purchased at Hotel Valley Ho then, (a straw Fedora) can still be bought there now. 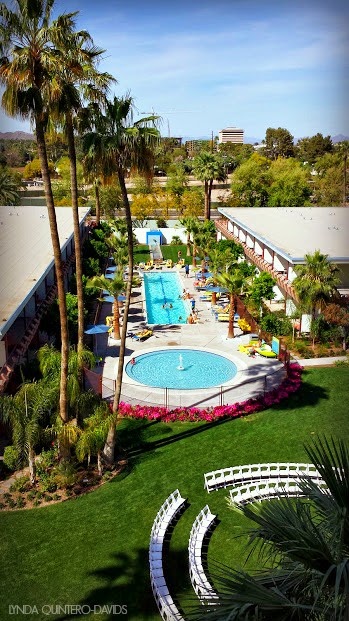 
The Exclamation Point Pool was just added between buildings 3 and 4 and opened Summer 2013 - Ironically, this is the 'quiet' pool. The main signature round pool (designed during the renovations in 2002) symbolizes a martini with an olive in Plan. It's a fave hot spot for DJ's and the local Spring Break crowd. The rooms around this pool were all originally designed "private" - The only means of going "room-to-room" was to swivel the pole panel between them on the back balcony. This feature is only available in the original buildings 1 and 2. The rooms around the pool were designed without windows facing the pool, creating the most peaceful and quiet transition happening between the (party) pool and rooms. 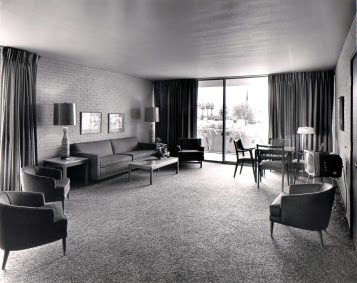 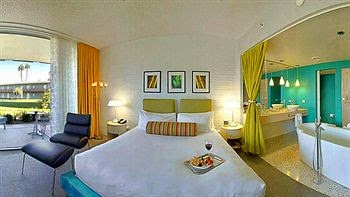 
When the rooms were first designed, most of them were designed without a traditional bed - Instead they were mainly designed as entertaining spots with an open space, minimal furniture including two lounge chairs, a round table and a sofa, which actually was a sleeper sofa so if you HAD to catch a few zzz's after partying, you could pull-out the bed and crash. Suites just meant your room had a small kitchenette. Today the rooms are well appointed with colorful surroundings, the iconic B&W floor, various size beds, ample seating and even for some: a floating bathtub in the middle of the room with track set curtains to create privacy (or a show! lol) Some of the newer additions to the Hotel was also to create condominium style rooms, with a full kitchen, for those longer stays. 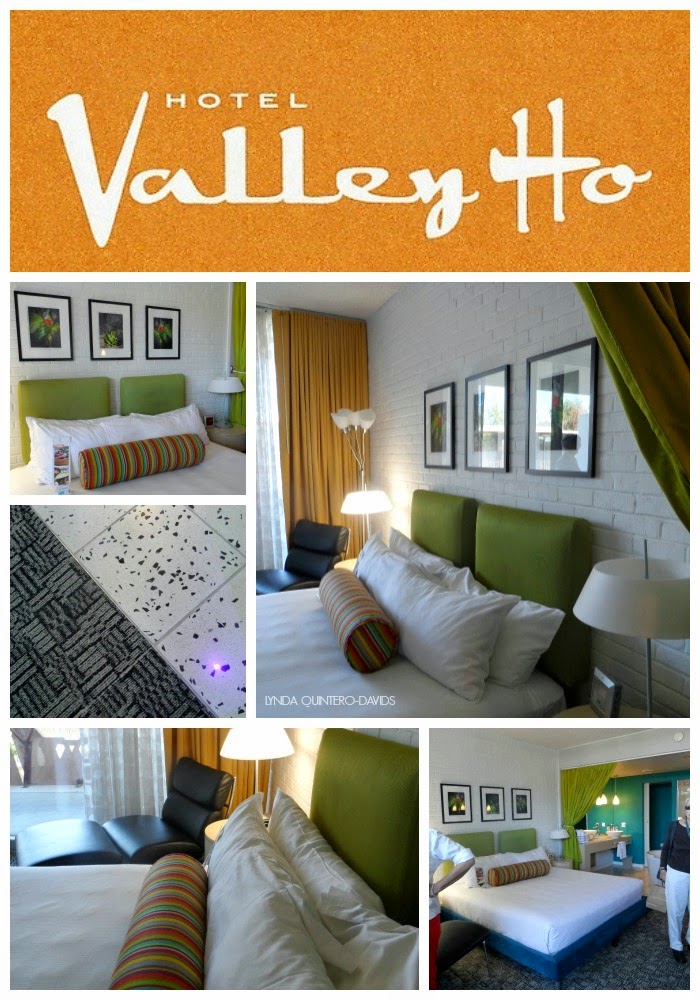 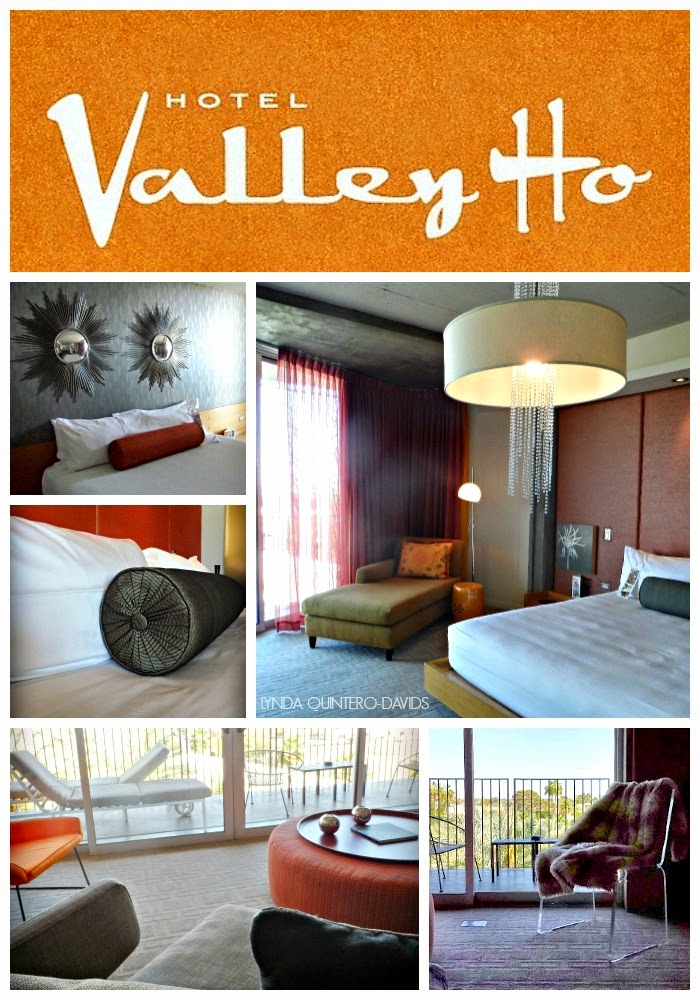 And here's a 'cool' little factoid: Did you know: The Hotel Valley Ho was the first hotel in Scottsdale to have central air conditioning, enabling it to be open all year! When Varney designed the hotel, he put all the utility wires underground into 5-foot-high tunnels. For more cool factoids and history about Hotel Valley Ho, visit these sites:
Hotel Valley Ho - History
The Modern - What Was Is
Historic Preservation

After the tour, we enjoyed lunch or drinks at ZuZu. I was in my element: The outdoor spaces of Hotel Valley Ho is very reminiscent of several South Beach Hotel designs and lounges, especially since the hotel had so much lush tropical-like landscape - Loved it! 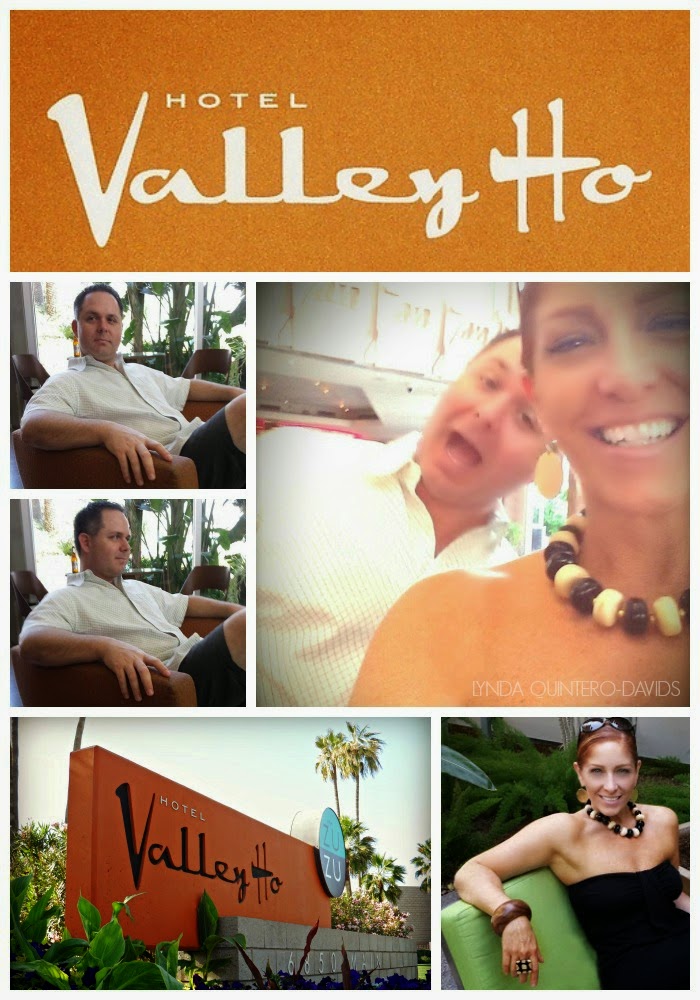 ZuZu had several Martini's and mixed potions to choose from - I tried the Marilyn Monroe... It was deelish!

We liked the hotel so much, we even looked into some of their Spring into Summer specials for a weekend getaway for our upcoming anniversary. 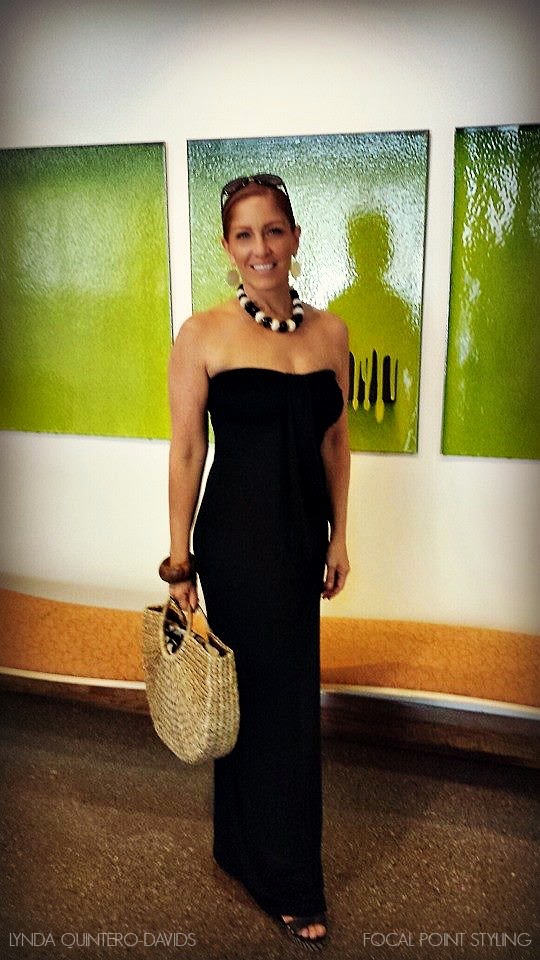 If you're in the Phoenix - Scottsdale area this coming weekend, you too can join the tour with Ace Bailey at 10AM, Saturday morning for another tour during Modern Phoenix Week. For ticket info, visit Modern Phoenix and purchase tickets online at Scottsdale Center for the Performing Arts.

Posted by LYNDA QUINTERO-DAVIDS at 12:02 AM