About Housing Works - Thrift & Design On A Dime

Coming up on Monday, I'll be participating in the February design bloggers link-up with Olioboard. The topic will be on Charity Causes. The Charity I chose to highlight is Housing Works. Although I am not directly affiliated with the Housing Works, Inc. organization, I wanted to share (here in Part 1 of a 2 part post) how I learned about them -- especially since I don't even live in NYC. It goes back to one of my initial blog connections when I first started blogging back in late 2009, and began my social media connections (especially on Twitter) in early 2010. I don't remember how, but I had started tweeting with Stan Williams, author of the blog, The Elegant Thrifter. We tweeted during the Academy Awards (which reminds me: we have a Twitter-versary coming up!) and I learned he had collaborated with an organization for his book called "The Find." I enjoy thrifting, but this was the first book I ever bought demonstrating the potential of trash to treasures, flea market adventures, upcycling & repurposing plus thrifting good finds... The organization Stan had collaborated with was/is called Housing Works. 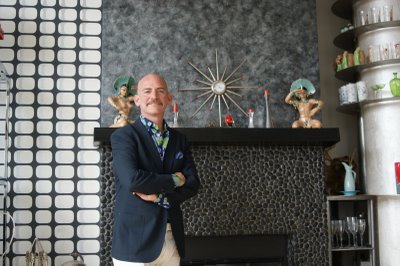 Stan Williams - Author of The Find - a Housing Works collaboration

About a year or so later, Jeff and I were going up to NYC for the 911 ten year anniversary. I didn't get to meet Stan (I think he was visiting family in Kansas at the time) but I did make it a point to visit one of the 12 Housing Works Thrift Shops located throughout New York City. Zaggat reviews Housing Works Thrift as, "Tremendous finds await the patient picker at this never stagnant local chain considered the Bergdorf of thrift outfits, where browsers happen upon super-fashionable vintage and contemporary clothing and designer furniture, all tended by pleasant, unobtrusive staffers." 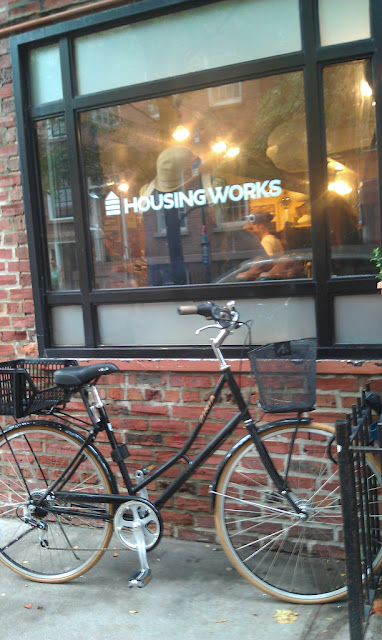 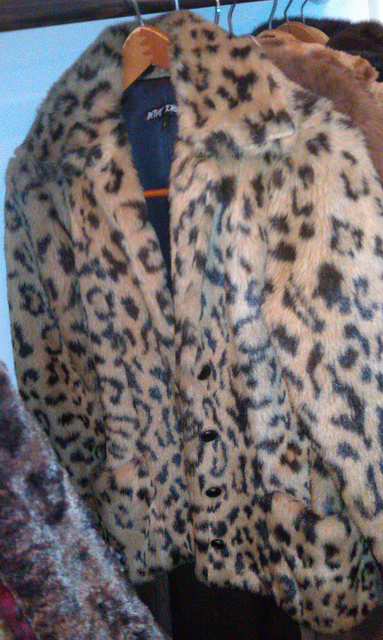 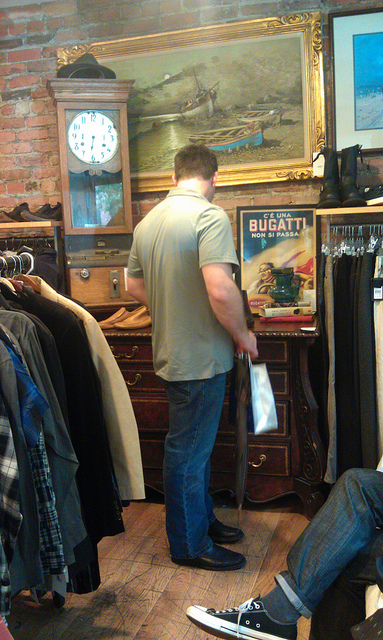 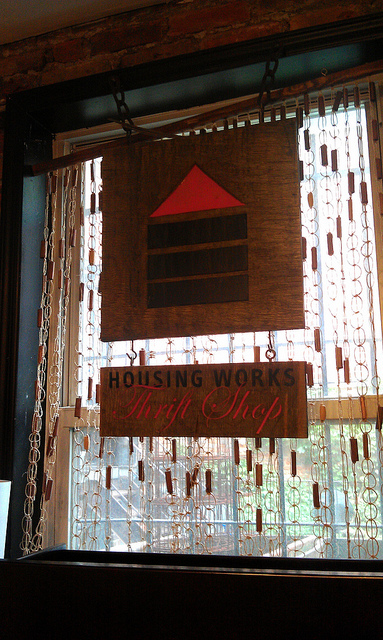 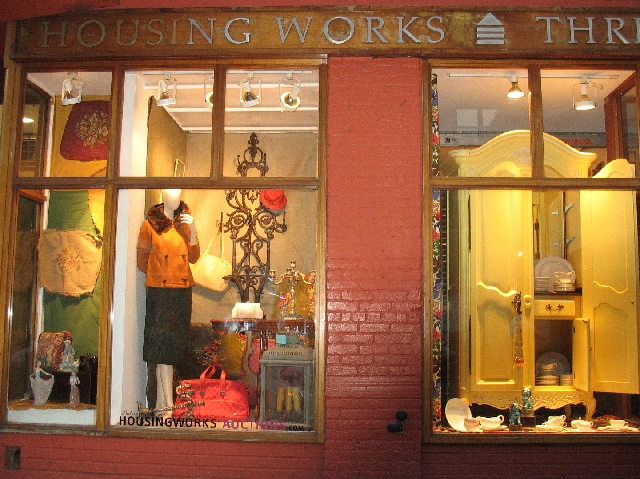 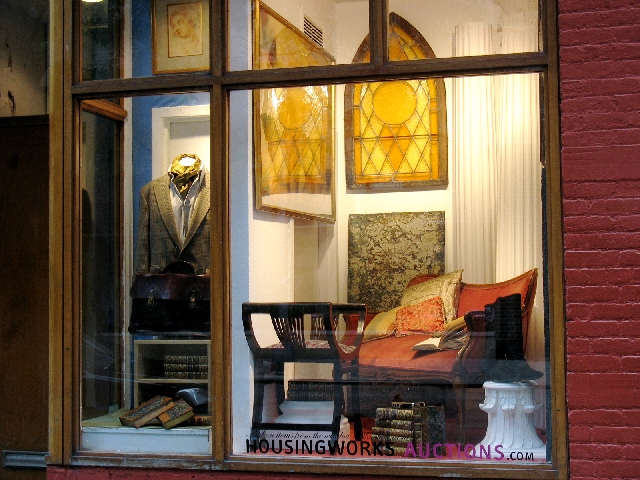 On April 25, 2013, Housing Works will present New York City’s most popular interior design annual benefit event at the Metropolitan Pavilion in Chelsea. Design on a Dime features more than 50 of the world’s top interior designers, who create unforgettable room vignettes with new merchandise, which is donated and then sold for 50 to 70 percent off retail pricing! Opening night reception is April 25: shopping preview, cocktails, hors d'oeurves, and music. For two days afterwards (April 26 + 27), it will be a public sale. Here's a peek at some of last years creative room styled vignettes... 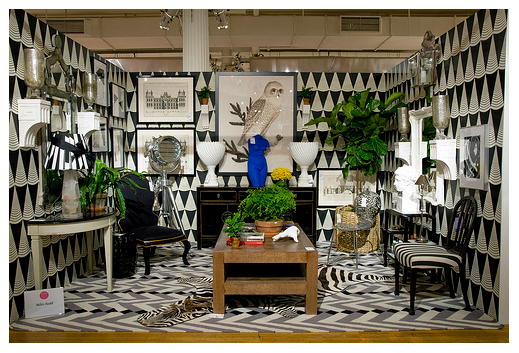 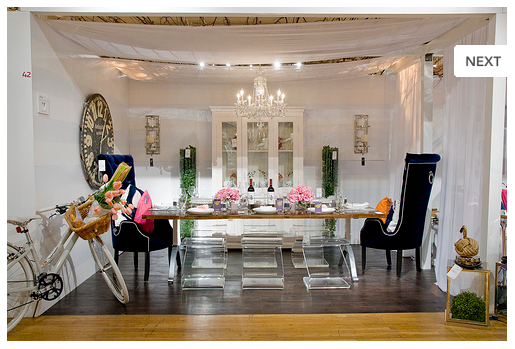 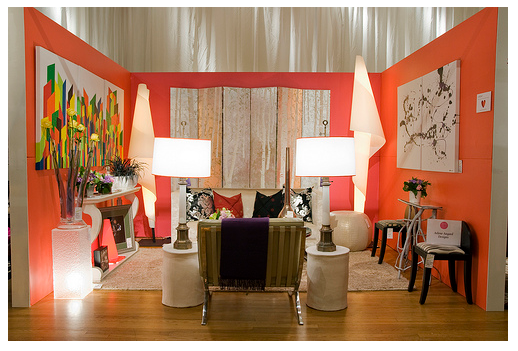 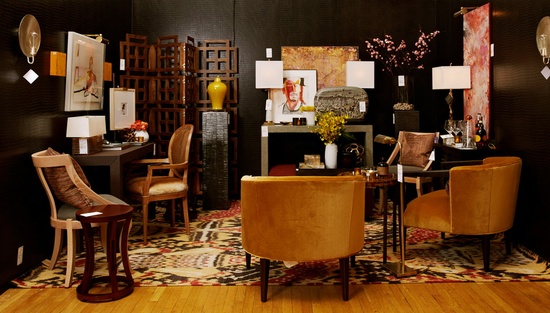 Each year of the event, Housing Works invites interior designers to participate in creating rooms for auction - or "vignettes" - of donated goods... But these goods are not used garment or household donations from city dwellers. These donations come from showrooms, vendors and manufactures in the furniture design industry. The vignette items are sold through auctions. All proceeds from a silent auction benefit Housing Works Jefferson Avenue Residence, a new housing development in Brooklyn for homeless adults living with HIV/AIDS which opened in summer 2012. I learned about the Design On A Dime event - again from an online connection - a spectacular designer and heart-felt AIDS advocate in NYC named Patrick J. Hamilton. 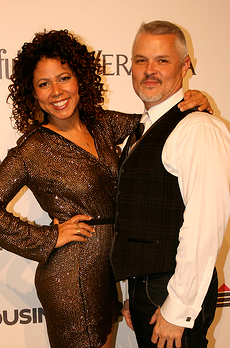 
Somehow, I think Patrick and I may have met somewhere for he use to live in Miami prior to moving to NYC. I had also first learned about Patrick J. Hamilton when I had blogged about Eddie Ross and the Big Window Challenge that happened at Bloomingdale's -- Patrick had won the challenge the year before Eddie did. Here is Patrick's award winning window for Bloomingdale's flagship store in New York City... 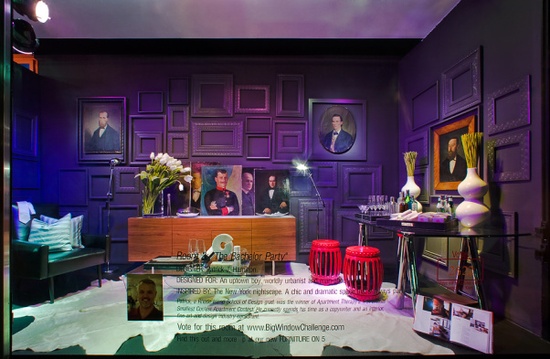 
Last year, Patrick designed a vignette from the showroom pieces he campaigned for through using Facebook. And this year, Patrick is adding in more use of Pinterest (see Patrick's 2013 Ideaboard) and a Gift Registry (see Patrick's 2013 DOAD Wishlist) to campaign for the pieces he'd like to create his vignette for the Housing Works - Design On A Dime Event. I'm very excited to see what Patrick creates this year - This is his third invite by Housing Works to participate in the event. Patrick first participated in their fundraising premiere design event in 2011. Here are some photos from Patrick's previous Housing Works DOAD vignettes...

Design on a Dime vignette 2011 by Patrick J. Hamilton 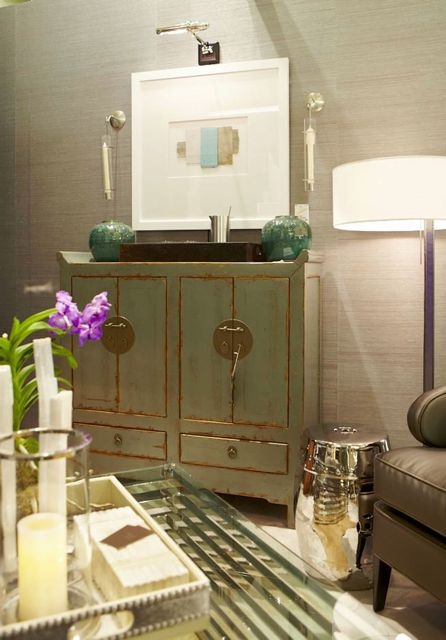 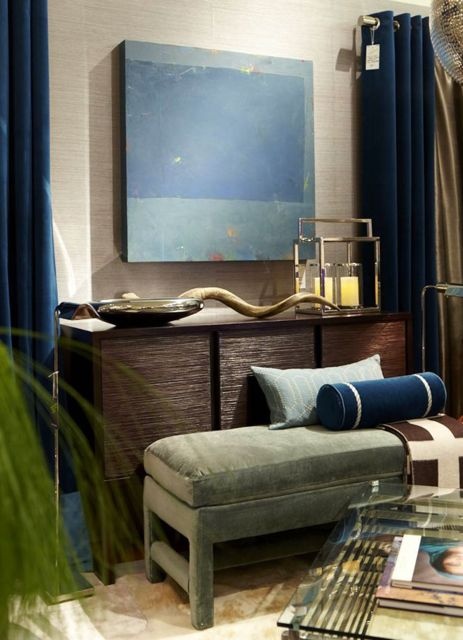 Design on a Dime vignette 2012 by Patrick J. Hamilton 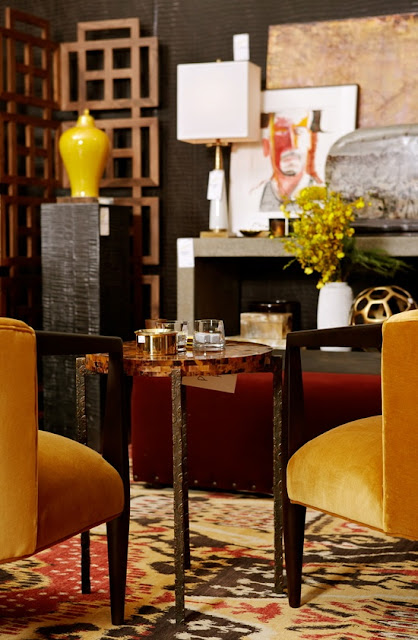 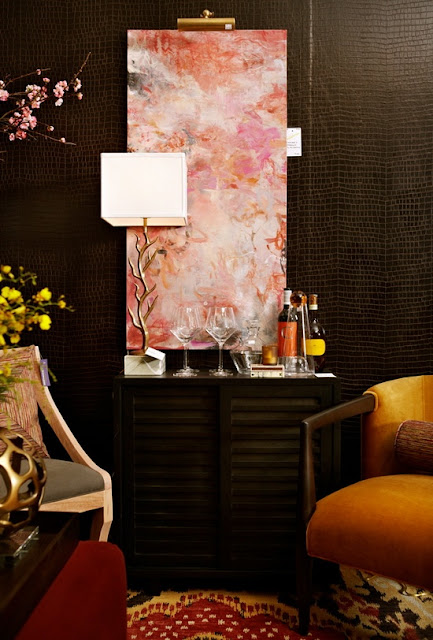 The Housing Works Design On A Dime Benefit debuted in 2004 and has gained notoriety ever since. I'm sure as last year, it will only be continuing to grow as a successful Housing Works fund raiser to further help facilitate their goal of ending the twin crises of AIDS and homelessness. Click here to watch a video from The Editor at Large at the DOAD event . Some of the Housing Works Design on a Dime Donors include: 1stDibs.com, Arteriors Home, Ballard Designs, Bernhardt Designs, Bloomingdale's, Bungalow 5, Calvin Klein Home, Crate & Barrel, Ikea, Jonathan Adler, Joss & Main, Nest Interiors, One Kings Lane, Ralph Lauren, Scalamandre, Seren & Lily, West Elm, Williams-Sonoma Home, V&M (Vintage Modern), and Z Gallerie -- just to name a few. See more donors here: Donors -- Housing Works. Some of its incredible sponsors have included: House Beautiful, Homegoods, Traditional Home, Veranda, Valspar and Elle Decor. Some of the events celebrity attendees have included Iman, Charlotte Moss, Genevieve Gorder, Andy Cohen, Alex McCord and... Nate Berkus! 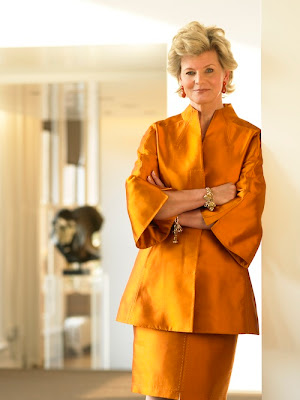 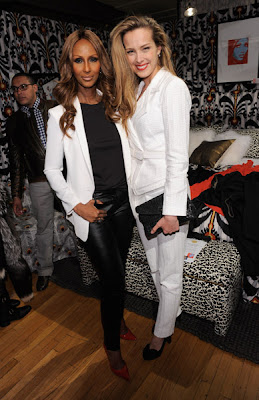 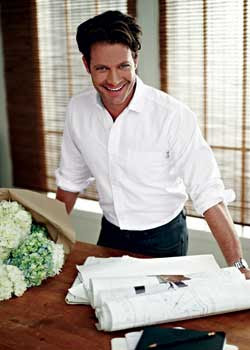 Nate Berkus (2011) says “Many New Yorkers know Housing Works as a great thrift store. But, their mission is a serious one, providing care and community for those suffering with HIV/AIDS. I am honored to join them for Design on a Dime, to raise funds and awareness for the good work they do.”


I didn't realize it, but even one of my favorite thrift makeover mavens is a chairperson for the Design On A Dime Event: The Dumpster Diva and Fab Flea Finder herself - Lara Spencer. Lara holds charity “Taste Maker Tag Sales” of her vintage finds on the website One Kings Lane and donates all profits to Housing Works, a non-profit that helps those living with HIV/Aids. Lara says the Housing Works Design on a Dime Event "is as big as The Oscars." 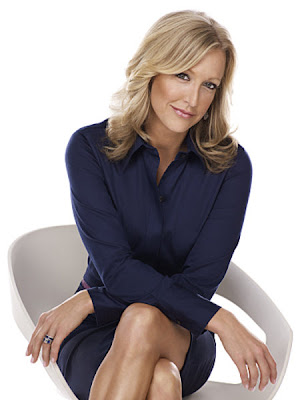 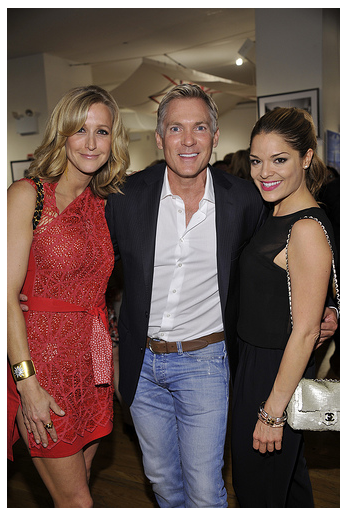 Lara Spencer with ABC's Sam Champion and HGTV's Sabrina Soto at Design On A Dime 2012.


Since I personally LOVE using Pinterest to collect furnishings and then apply them to online design boards for projects using Olioboard, I thought this would be a good opportunity to demonstrate this wonderful cause + event during the Olioboard February Charity Causes link-up (which will be Part 2 of this post). I hope you'll join me Monday, plus the other 9 design bloggers -- as they each share their use of Olioboard to to support their charity causes.

Posted by LYNDA QUINTERO-DAVIDS at 6:08 AM

Email ThisBlogThis!Share to TwitterShare to FacebookShare to Pinterest
Labels: Design on a Dime Benefit, Housing Works, Lara Spencer, Nate Berkus, New York City, OlioHop, Patrick J. Hamilton, Thrift
LYNDA QUINTERO-DAVIDS
Hello and Welcome to Focal Point Styling! I'm Lynda - sharing simple solutions to style & organize your home, fashion & decor trends, savvy shopping tips, market events, plus local love from the places I've experienced. I started this blog back in late 2009 when I lived in Miami. In 2011, I moved to Phoenix, AZ and rented a house until late 2014, when I relocated back east to the Triad in North Carolina - Join me on my journey!