That's one of the names of the exhibits happening in New York for the 10th Anniversary this weekend. And as I said last year, "Even if I have to eat grilled cheese sandwiches all year I WILL be there for the anniversary!" - and I am. My husband and I leave Ft. Lauderdale early Saturday morning, so we'll be in the City by 10am. For the first day, I'd like for use to just "be" in the City and take it all in. I love New York. Something about that place just always seems to bring me back to life. There is just something about the people, the energy, the traffic, the architecture and the history that just give me energy and also seem to calm me. 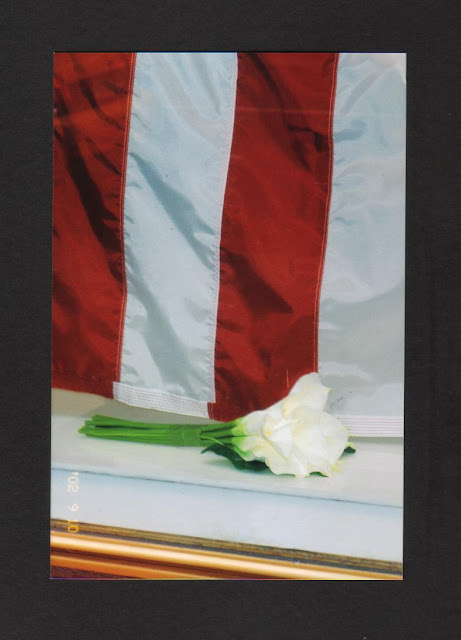 ﻿
NYC Window display - One Year Anniversary 09.11.2002
We'll only be there for three days, so I tried planning for us hit a few different shops, like Shareen's Vintage (from Planet Green's Dresscue Me) and Housing Works Thrift, which is having a Fall Event on Saturday. Saturday evening, we're meeting up with some family of mine I haven't seen since 2001 - Gail & Oscar. Gail and I had actually gone to the City in August of 2001... and to end that day, we went to the Twin Towers. You can read more about it from my post last year called  "Where Were You?" 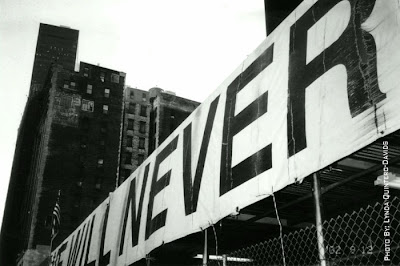 GROUND ZERO - ONE YEAR ANNIVERSARY 2002
﻿
Sunday morning, we're heading over to St. Patrick's Cathedral - not necessarily for a service, but I want to sit on the steps with I'm sure several other New Yorkers and visitors, and stay still for the moments of silence while looking south down 5th Avenue, reflecting back on that morning. Afterwards, we're headed to the NY Historical Society on the Upper West Side to see the 9/11 exhibit: Reflections, Remembrance, and Renewal. I'm sure we'll also walk through Central Park, and maybe even reflect back on not only 9/11 but what moments in life have mattered most to us since taking our vows there in 2007. 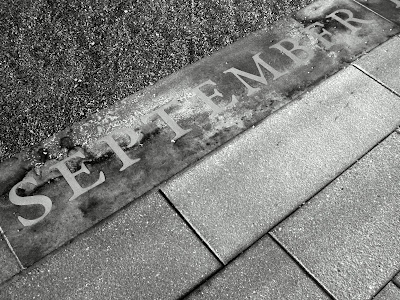 After lunch, we'll lighten things up a bit by heading over to the MoMA, Rockefeller Center, and Top Of The Rock to see the City. To really lighten up, we're heading out to Gotham Comedy Club to see Nick Di Paolo. With all that's been going on the past 2 to 10 years, I'm sure we could use a little laughter (and those two drinks for sure!) 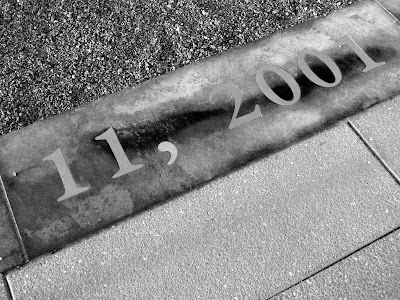 Monday will be a long day. We'll get up early, check out and put our luggage in storage at the hotel to head out for the day. We're taking the NY Water Taxi from Pier 84 down to Battery Park, and go wander around downtown. I like taking the water taxi or being out on a ferry on the Hudson, and looking back at the island. It will be interesting to capture pictures of the new skyline and see the changes.Although I did contribute some of my photo's to the 9/11 Memorial Museum on September 11 in 2009, I was unaware of the reserved tickets necessary to enter the memorial area, and the tickets are sold out. I'm sure though that we'll get to see some of it, but I'll have to make a trip back to really experience the plaza. 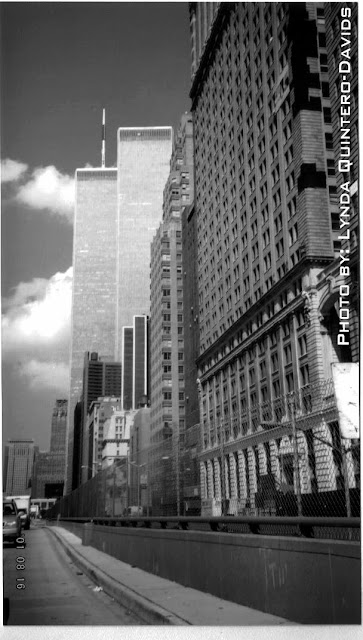 ﻿
World Trade Center - August 2001
There is also a Ground Zero Museum Workshop we'll attend along with going to a photography exhibit called Here IS New York. I 've already seen it when it first opened, but it will be good to see again - and good for Jeff to see as well. Hopefully before we head back up to the hotel, we'll have time to go walk across the Brooklyn Bridge... one of my favorite things to do while visiting the City. 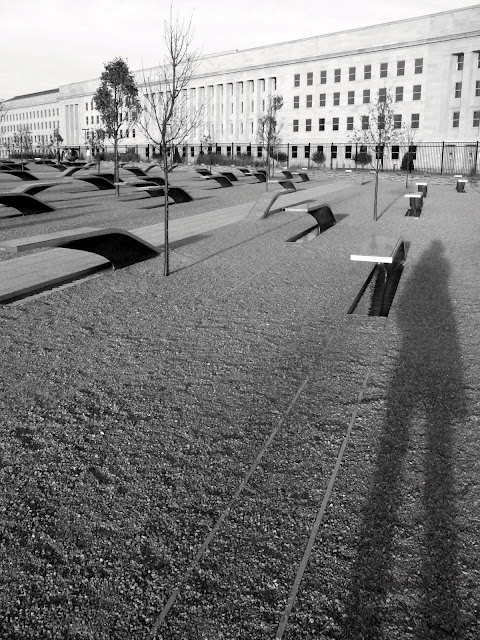 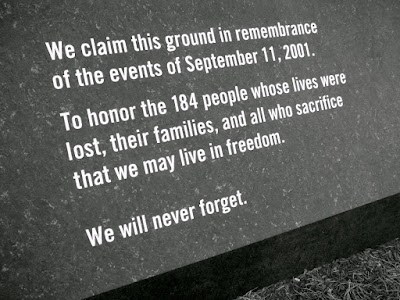 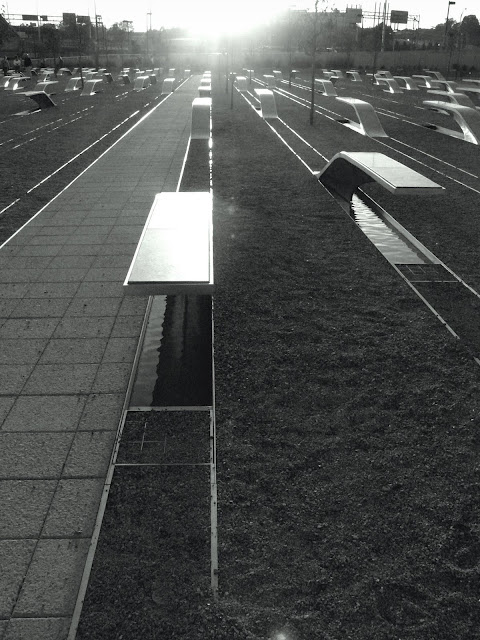 Pentagon Memorial - 2008
﻿
Than will be that ride back to the airport and come back here to Ft. Lauderdale... and begin to deal with... moving to Arizona, because Jeff got a promotion and relocation... which I really have mixed emotions about. But for now, it's time to escape TO New York, enjoy this moment, pray for those who lost their life on September 11, and give THANKS to all those who served to help and rebuild, curate, restore, and renew the Memorial and Lower Manhattan... 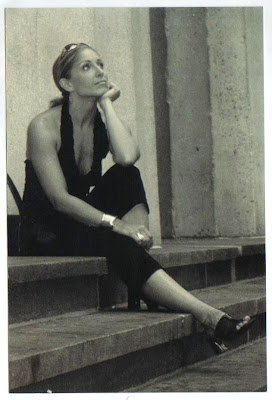 AUGUST 2001
Sitting on steps at the Federal Building, before going to the roof of the Twins. 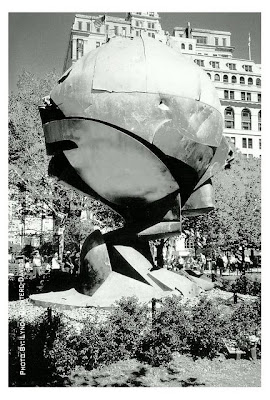 The Sphere -Battery Park 2002
What will you do to remember September 11? I think it's important to remember it, to learn from it, and to try to ensure we don't have something like that happen again. I have more photos & experiences I can share with you. Just click on any of these links to read previous posts:
September...
Remembering 9/11: Memorial Designs
Where Were You?
And also stop by to see the several photos people contributed or contribute a few of your own to the
9/11 Memorial Museum.
I'll see back on the blog next week... Which ironically is going to be a busy week: I got a call from a previous client - Her and her husband are relocating and they want me to give them a consultation for colors, finishes, and space planning for the new office... Plus I'm meeting with another client next week to plan a "while you were out" surprise bedroom makeover she wants to do for her husband. Both are going to be fun and challenging projects I'm looking forward to...

Blessings to you and your family... and Thanks for stopping by...

﻿
Posted by LYNDA QUINTERO-DAVIDS at 9:06 PM

Email ThisBlogThis!Share to TwitterShare to FacebookShare to Pinterest
Labels: Remember 9/11, September, September 11 Tribute
LYNDA QUINTERO-DAVIDS
Hello and Welcome to Focal Point Styling! I'm Lynda - sharing simple solutions to style & organize your home, fashion & decor trends, savvy shopping tips, market events, plus local love from the places I've experienced. I started this blog back in late 2009 when I lived in Miami. In 2011, I moved to Phoenix, AZ and rented a house until late 2014, when I relocated back east to the Triad in North Carolina - Join me on my journey!