Hi all!! Can you believe not only is the weekend here, but we're into the second month of a new year?? I know I've been so consumed with sourcing shops for the Color Splash team and helping out with makeovers while maintaining our home front, and it really just feels like this past month just flew by! I know most of you are buried in snow, but down here in Florida, we're already starting to feel the effects of longer days (YAY! More sunlight!) 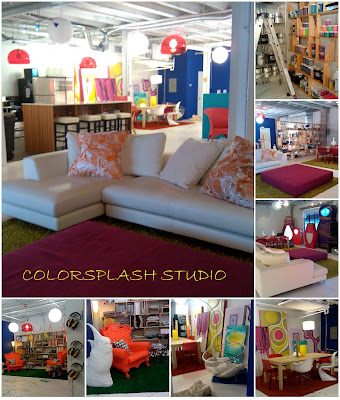 All photos captured by Lynda Quintero-Davids.

As promised, here's some before and after shots of the studio makeover, accomplished by just five of us gals (Patricia, Gina, Laura, Kathy and myself), in basically two days, with minimal money spent. Basically the only money spent was on purchasing more clear totes for snacks and food in the kitchen area, storage boxes to conceal some of the samples collected over time, mobile office supply containers and hired two guys to paint a few walls one afternoon (grey and blue). 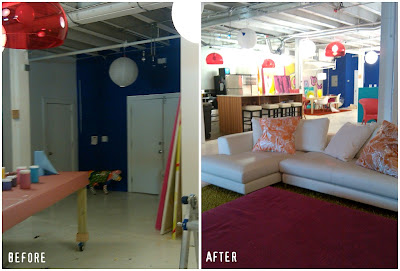 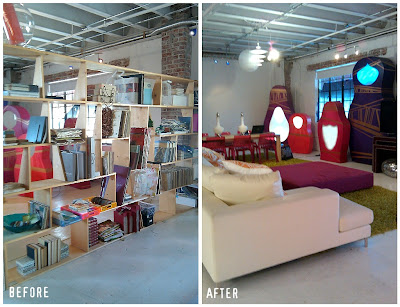 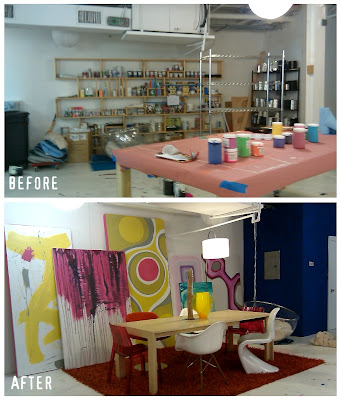 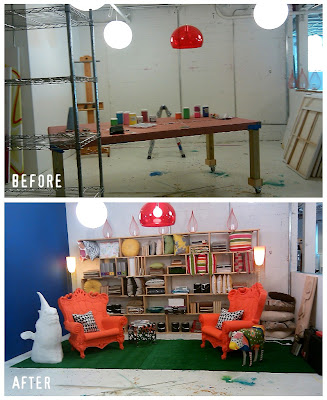 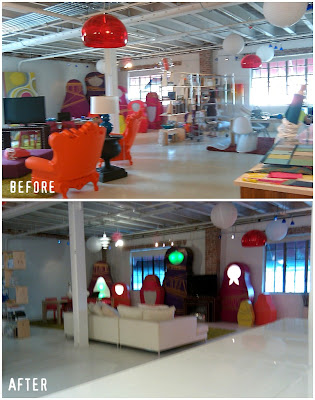 Two days before the move, Kathy and Gina had measured most of the studio, so that Gina could input the info to come up with a CAD drawing. The Associate Producer, Lauren, also asked me what I thought of the current layout and if I could come up with an option for Julie and the crew to choose from - so I did what I usually do - I came up with Option A, B, and C. We had a meeting the following day, and we all agreed it would be between option C and Gina's plan, so both plans were faxed to Julie. And even though Option C was chosen, we tweaked it along the way. And the camera crew also has done some tweaking for depth in their shots... 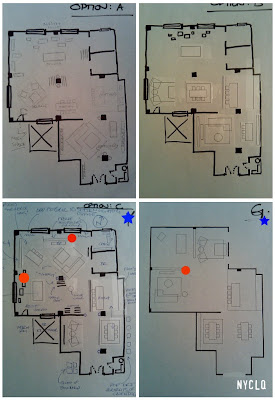 Yes - Laugh. I don't know CAD - but I can
sketch, cut & paste the hell out of any space plan and
help move it to make it happen! =)

The A, B & G plans were rather safe - lining things up to the wall and boxing off areas, but for option C I had utilized what I remember a teacher telling me - "Don't always play it safe" and "Whenever you're given something, go with it don't fight it." Keeping that in mind, considering the open loft space and taking a cue from the current layout, Option C incorporated "floating" spaces by using 45 degree angles. I use to do it in the store as well, and for some reason, angles get met with resistance. However that may be, the space still turned out amazing after we were done moving it around, cleared the clutter, and created a few vignettes... 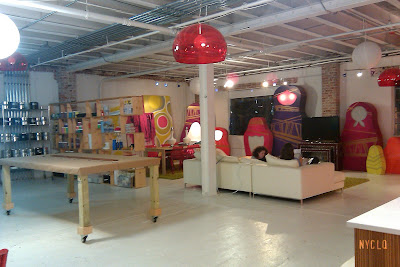 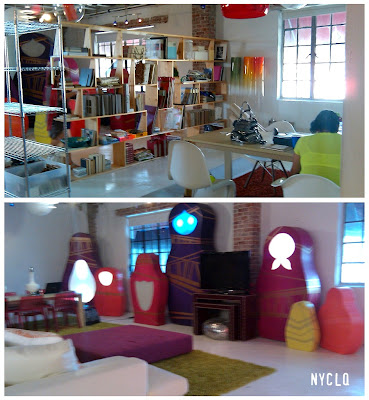 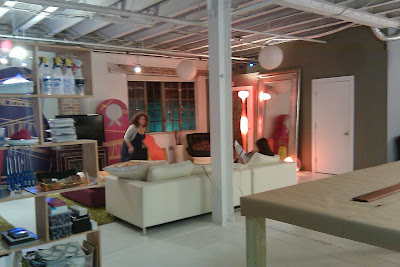 Although I did try the angled seating area and adjacent office table, I was was out-voted (and I'm the newbie so I didn't argue). I moved forward to work on the two wall units, unloaded the two carts of stuff we had emptied off them to move them, and styled the shelves to reflect the creativity in the space. To help empty out the office (to be revealed later) I was going to utilize some of the accessories paired with all the sample books. Patricia got a jump start on that by bringing over all the extra pillows out of the office storage. I brought over some of the unlabeled paint cans - in black to help ground all the color and give weight along the bottom on the unit. Bringing over the two orange Bobby Berk chairs helped create a possible new area to film "Options" in (which they did and I got to see in action yesterday!! VERY cool!) 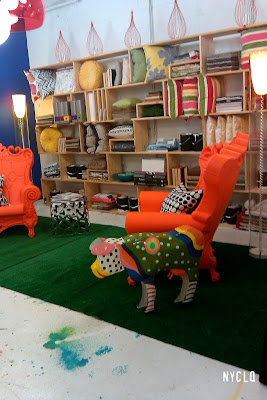 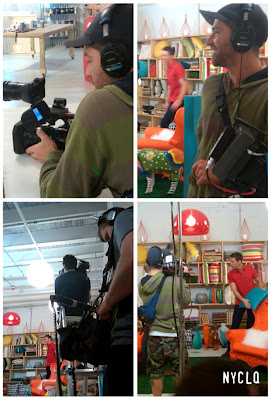 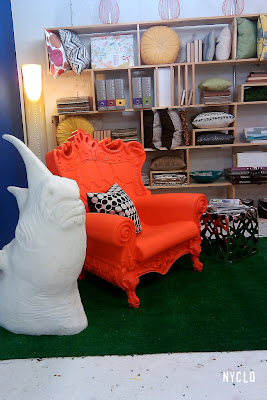 ﻿
Patricia had the brilliant idea of grouping the rest of the paint cans by color blocks, and labeled all of them with simple grey duck tape and a black marker (I love when things are organized!! And this now is!!). The silver and black cans give an industrial look to David's new painting area, and also framed the window by using them on either side. It also created a great little nook to stack all of Davids canvases - which were removed from all their shopping boxes. The added bonus: both paint can fixtures are on wheels so it makes it easier for the camera crew to move around for a shot if needed. 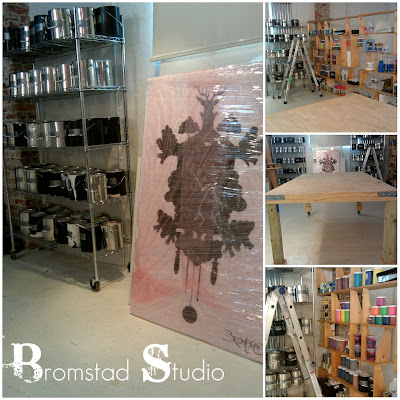 ﻿
Speaking of organized... here's some more details of the studio makeover... 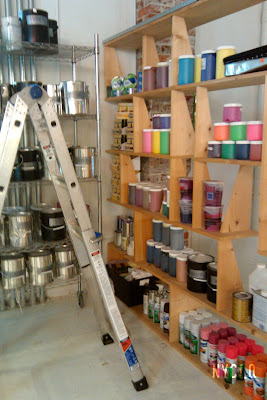 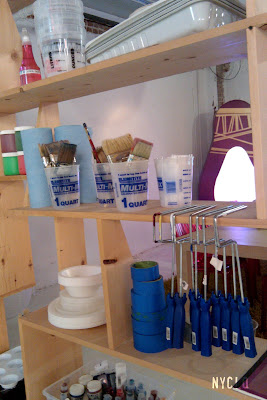 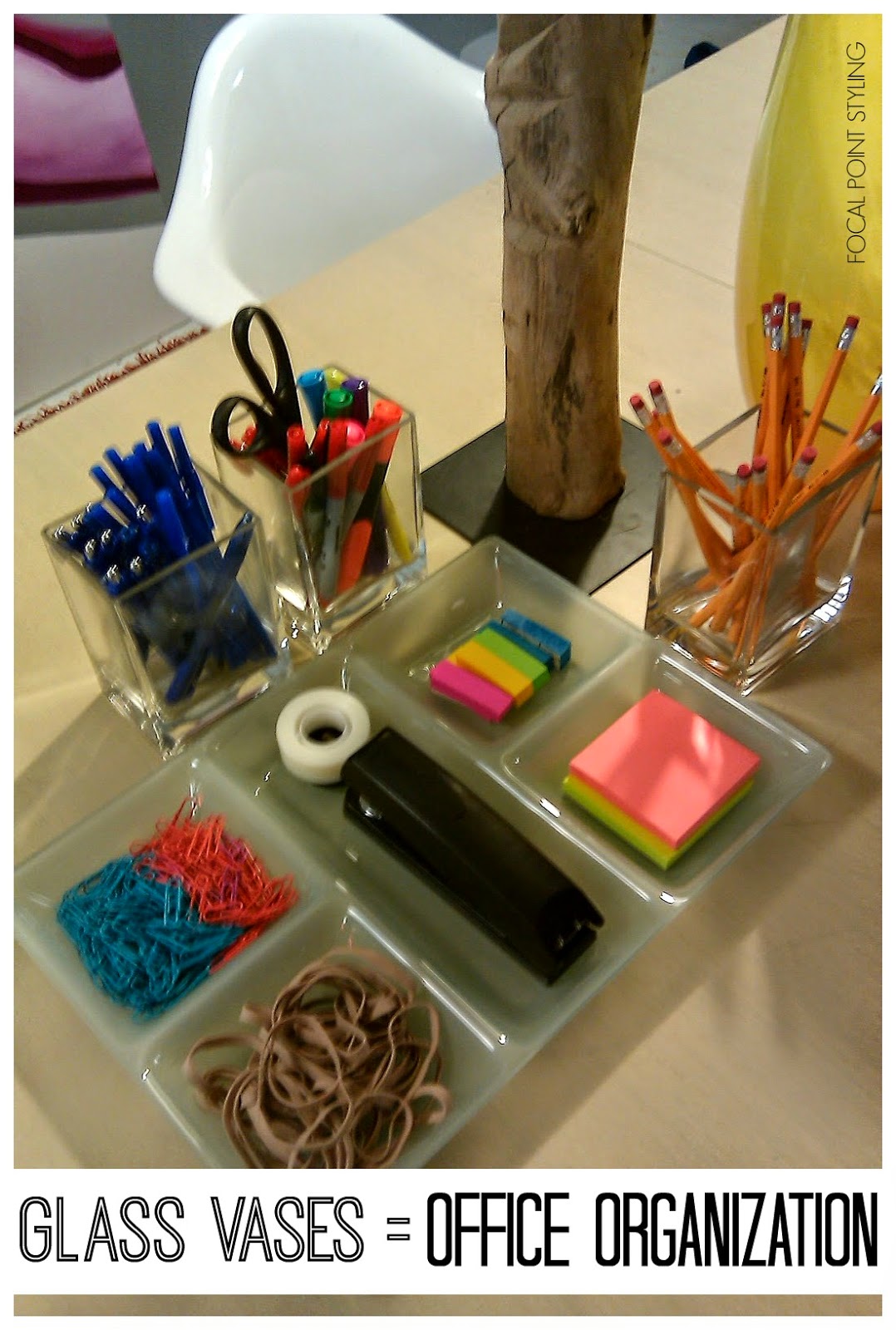 Mobile office supplies:
I picked up this glass tray at Ikea for 9.99
along with some glass vases to hold pencils from HomeGoods. 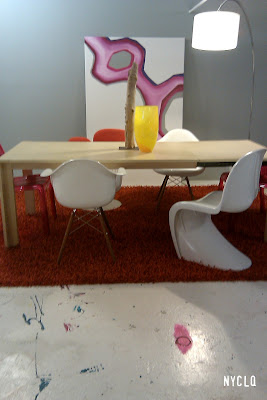 One of two studio work tables 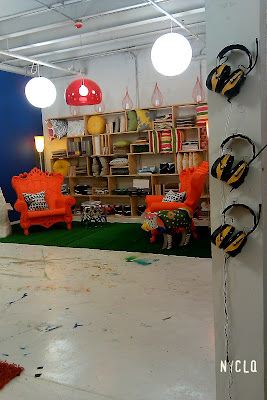 It's been a VERY cool experience to see behind the scenes of how a show is produced, all it takes to "get the shot", moving the studio around to create depth in the shots, and the importance of lighting.... 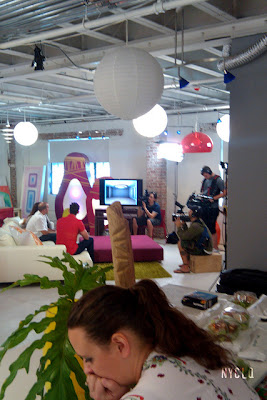 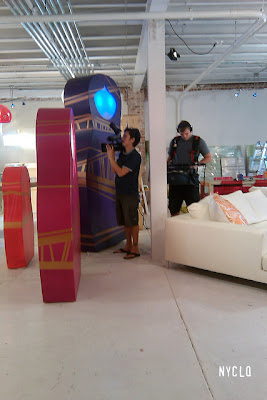 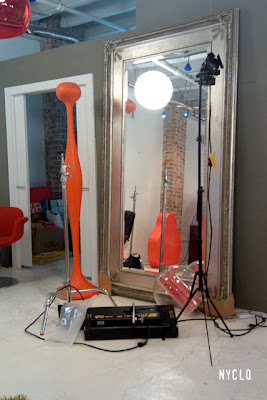 Hope you enjoyed the Color Splash Studio tour. As with any makeover for anyone, who it was for is HAPPY and that's what matters most. Yesterday, while I was helping clean-up over at the makeover house, David paid me a tremendous compliment that made me VERY happy. He said, "You're so neat and organized - I love it!" 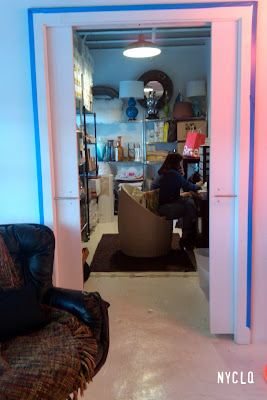 The office got a little tweaking too... I'll show that next week.
Today I'm off to thrift because Faith Farm is having a SALE!

Have a wonderful weekend﻿!

Posted by LYNDA QUINTERO-DAVIDS at 7:39 AM

Email ThisBlogThis!Share to TwitterShare to FacebookShare to Pinterest
Labels: #HomeGoods, Artist Studio, Color Splash, Ikea, office makeover, office organization, studio makeover
LYNDA QUINTERO-DAVIDS
Hello and Welcome to Focal Point Styling! I'm Lynda - sharing simple solutions to style & organize your home, fashion & decor trends, savvy shopping tips, market events, plus local love from the places I've experienced. I started this blog back in late 2009 when I lived in Miami. In 2011, I moved to Phoenix, AZ and rented a house until late 2014, when I relocated back east to the Triad in North Carolina - Join me on my journey!