After three days of unloading closets, storage ottomans, and boxes in the garage, I prepped and organized for our Garage Sale we had this past weekend. Friday night, I pre-set tables and priced all the items so we were ready to sell 'literally' as the garage door opened Saturday morning. And no joke - while Jeff was putting up signs outside the community, I had about 6 people already standing inside the garage and buying stuff - at 7:30 in the morning! When Jeff came back, we brought the tables out to the driveway - placing them on an angle facing the traffic coming in. People found the sale through an ad on Craigslist, the extra signs Jeff posted outside the community and tweets that I sent which also posted to facebook! I even gave a house tour to local blogger who stopped by - Yanet of 3 Sun Kissed Boys - and she is coming back later this month to photograph our home. Here's some pics of the event and take away tips from it... 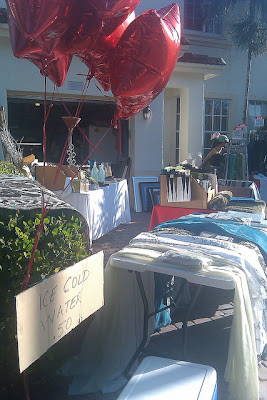 Welcome to our Summer 2011 Garage Sale! 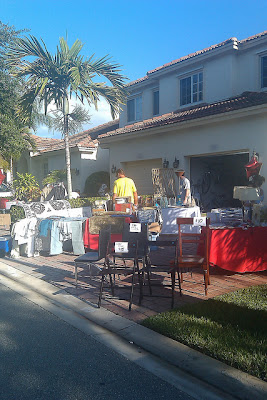 Attaching larger signs to furniture helps to sell it easier - and also show the "markdowns" later. Solid wood chair "was" $10 - Slashed to $8 and SOLD! 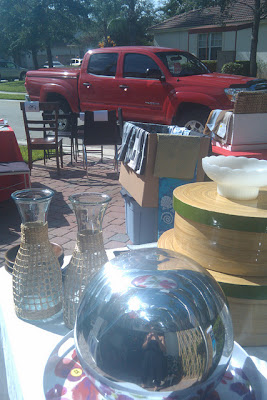 Having the tables set on an angle facing traffic made it easier
for them to see - and go pullover to come shop! 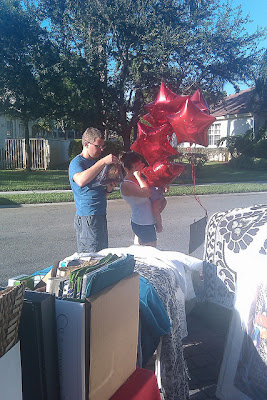 A cluster of balloons at the entrance helped attract attention. It was tied to one of those garden banner posts. Jeff used it to make the sign for the water. With a Summer Garage Sale - selling "Ice Cold Water" for .50 is a worth while investment =) As were the balloons - I told the guy - "You buy the clock, I'll give your daughter a free balloon and a bottle of water." SOLD! =) lol 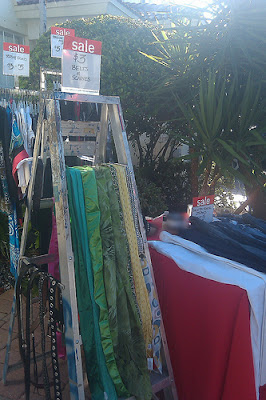 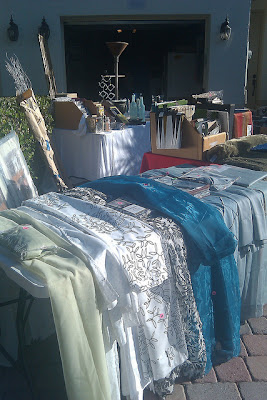 I used one of the banquet tables to show color and prints for
window panels and shower curtains. 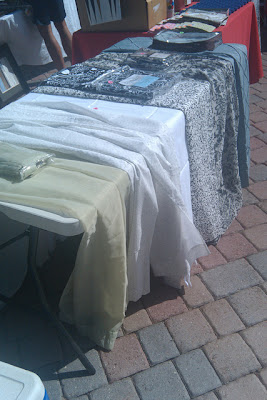 After they'd sell or the table was shopped, I'd recover & regroup. 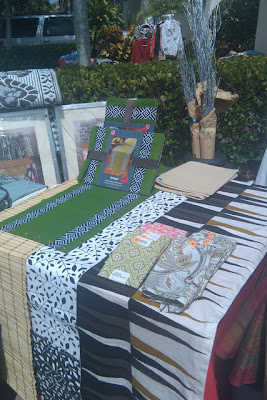 Opening up packages or folded items to show their prints helped to sell items.
All but two tables runners here sold =). 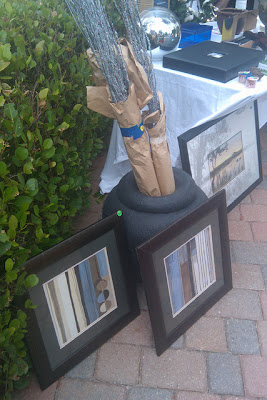 At first, all artwork was grouped together, but then I started to face them out wherever I could. It helped to sell them. We only had to donate 3 out of 10 - all the rest sold =) 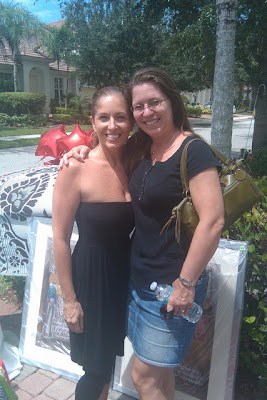 Old friend who saw the tweet posted on facebook about the Garage Sale - so she brought her mom - and they shopped!! So nice to her - This is Cindy. She was actually living with her kids & hubs in Japan at the time of the earthquake. he was stationed there, but now they've moved back to the states! YAY! 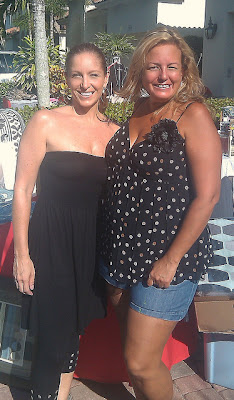 Local blogger, Yanet of 3 Sun Kissed Boys stopping by to get her shop on!! 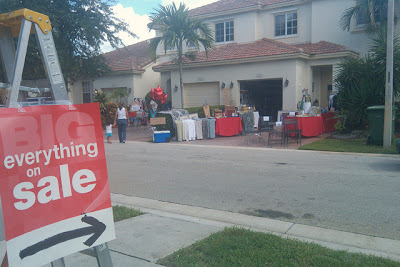 We used a ladder across the street as a sign holder. These were also the same style sign Jeff put up outside the community, but with our address to get here (and I wrote "ALMOST" above everything). 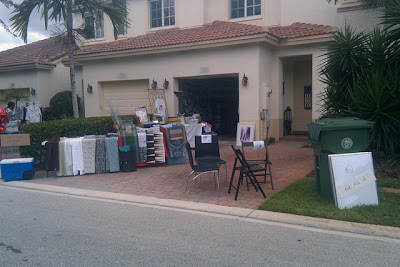 A third set of clouds started to roll in, so we condensed the tables to get ready to pull these items back into the garage for the next day. 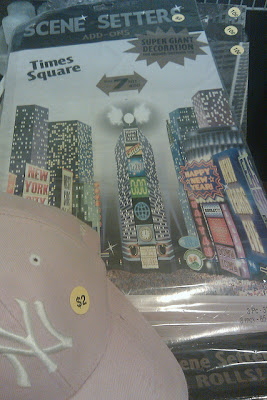 I group like items together - even if it was based on a theme.
Here, I was "Selling NY" - and I did sell these plus a i heart NY tee =) 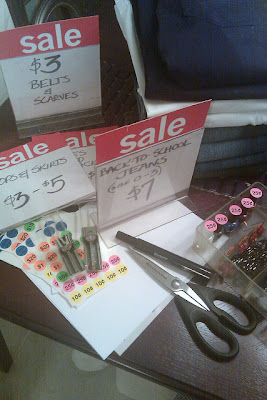 Pricing items and making signs the night before was a huge help! 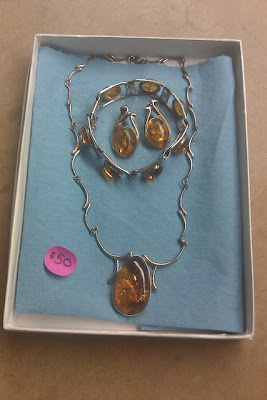 Higher ticketed items I kept on the workbench back inside the garage. If someone asked (and they did) if I had silver to sell I'd pull this out. Since it didn't sell at the GS, I'm taking it to a Consignment Shop. 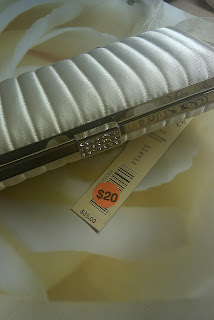 Same with this evening bag - or could be used as a brides purse - Taking it to consignment.
It's nice to donate, but not everything needs to be. 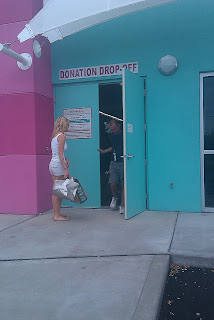 After the 1/2 Day Sale on Sunday, we loaded up the truck to take donations up to Ft. Lauderdale's Out Of The Closet Thrift Shop. Proceeds from their sales go towards the AIDS Foundation. Then we came home, to sort and roll coins. I sorted, Jeff rolled... and decided how we'd divide the money made. Since my phone is on its last legs (first HTC Droid from 2 yrs ago) and it has become my lifeline - some funds have been allocated for an upgrade - which is great timing because the contract with Verizon ends August 17. The rest is going to pay bills. Jeff also sold a gold bracelet to a dealer who passed by and he got $120 for it (I think he should have gotten more but...) So together we made nearly $600. Not too shabby and a huge help right about now, plus I was able to reorganize closets and the garage - I'll share shortly. 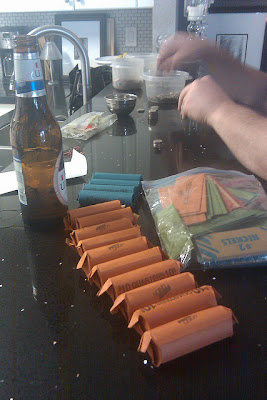 ﻿All those coins can really add up!

So if you're thinking about cleaning out your closets or garage, also think of having a garage sale! You can use those funds for the things you need - like Back To School shopping or supplies, or maybe there is something you'd like to do around the house, like makeover a spare room into a craft space or office. It's a great way to (profitably) get rid of the things you don't use - and donate the rest!

When I first started blogging (back in November 2009) we had our first garage sale - you can read more tips here: Merchandising A Garage Sale to SELL!

Posted by LYNDA QUINTERO-DAVIDS at 6:56 AM

Email ThisBlogThis!Share to TwitterShare to FacebookShare to Pinterest
Labels: Florida, garage organization, garage sale, Lynda Quintero-Davids, Research Garage Sale, shopping tips, tips, Tips & Tricks, Visual Merchandising
LYNDA QUINTERO-DAVIDS
Hello and Welcome to Focal Point Styling! I'm Lynda - sharing simple solutions to style & organize your home, fashion & decor trends, savvy shopping tips, market events, plus local love from the places I've experienced. I started this blog back in late 2009 when I lived in Miami. In 2011, I moved to Phoenix, AZ and rented a house until late 2014, when I relocated back east to the Triad in North Carolina - Join me on my journey!