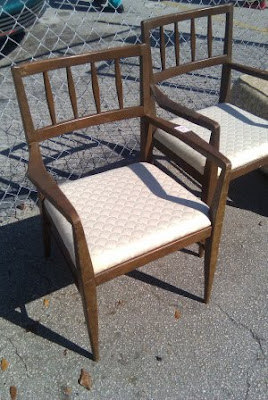 Although second-hand-finds can be a turn-off for some, being recession minded, thrifting can be a non-stop visual feast for others. Most of the finds I've been drawn to are of mid-century design. Picking up one of these vintage values can update the look of even the most sophisticated and traditional space, or even create a new focal point and topic of conversation. If buying a modern piece to add to your traditional collections, a great place to start is a chair. 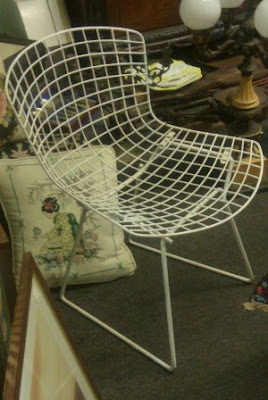 Could also work in an outdoor setting 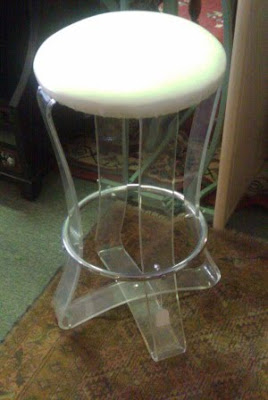 Go retro with a ghost-like stool
Some chairs just have a sculptural stand-alone appeal to them, while others can provide function with a modern aesthetic... 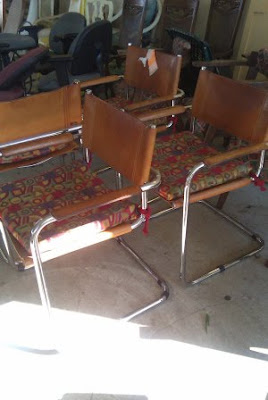 (don't ask... I did not put those cushions on these chairs...
and WHY would anyone???) They sold regardless:
$15 for set of 4 leather & chrome chairs

EZ fix at $5 for the pair:
just update the seat cover and maybe give it a fresh coat of stain
(GREAT LINES!!) 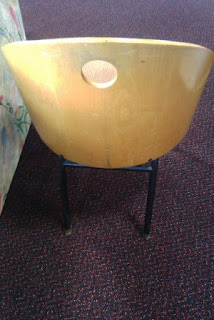 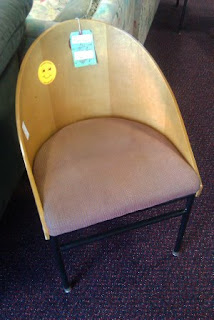 EZ fix: reupholster in black (or white) leather.
A most recent find was at my local SA the other day: two modern styled barrel like chairs. The pair was selling for $59. Not bad for a pair, but it got even better. I came across a similar styled chair while visiting Lushpad.com (great online source for mid-century finds). They were barrel chairs as well, called Academy Chairs by an award winning Canadian designer named Tom Deacon, and selling for $900 for four. 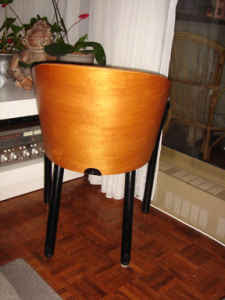 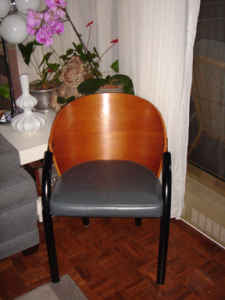 Tom Deacon Academy Chairs at Lushpad.com
I googled Tom Deacon Academy chairs, and found the same set on sale on Craigslist (at the same price), but also learned these chairs were originally purchased in 1989 for $2800 and said to be a design inspired by Philippe Stark, who designed a tub chair in 1982 called Cafe Costes. 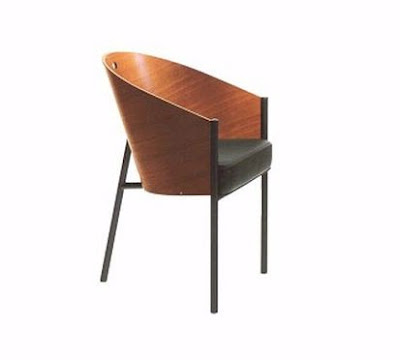 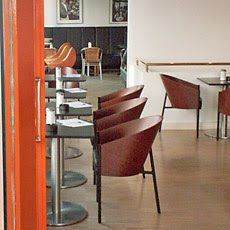 Philippe Stark Costes chairs in Paris (1982)
This famous chair inspired by Philippe Starck was originally designed for Café Costes in Paris. It was designed with three legs so that waiters at the café would not have as many legs to trip over. Any of these chairs would make a great mix with an existing traditional or modern space. But buyer beware.... 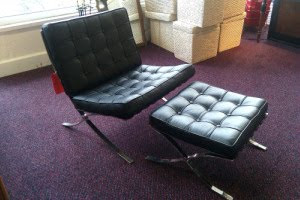 Mies van der Rohe Barcelona Chair
This 'find' actually sat at the Salvation Army for over three weeks...
Probably because of it's ginormous price tag! 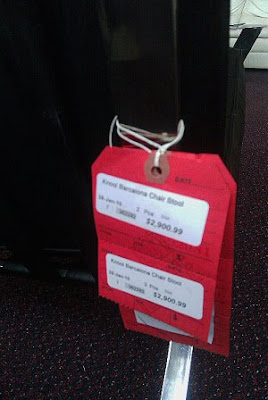 Not all finds need to be for indoor spaces. Some interesting patio or garden chairs can be finds too; BUT: beware of weather worn elements. Can you repair it on your own? or will it cost you, and if so how much?
Not all thrift finds are values: 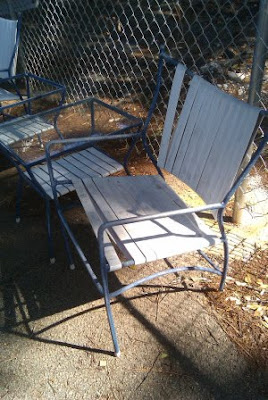 These could be, IF you know how to re-strap a chair... 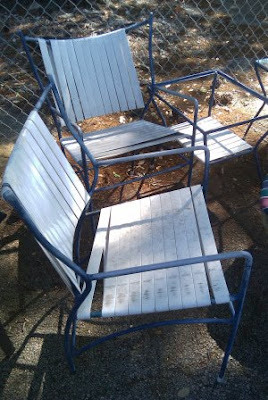 But weather worn wicker...
not such a great idea, especially if you're planning on putting right back outside in the elements...
(unless you are familiar with caning: go for it!) 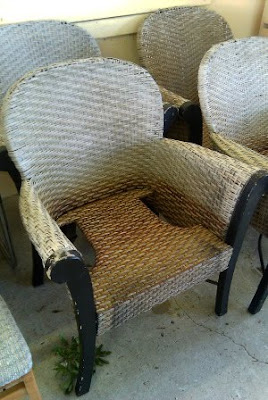 again... $5 finds...
Most of these deals were found at Faith Farm Thrift up in Ft.Lauderdale... which I also learned while I was there, they are actually having a SALE this weekend (on Friday & Saturday). How they can go any lower on chairs for $5 I don't know, but.... knowing all these goods are donated, they still stand to make huge gains, and better yet, it's for a church. Now that IS value added.
Happy Thrifty Thursday!

Posted by LYNDA QUINTERO-DAVIDS at 8:53 AM

Email ThisBlogThis!Share to TwitterShare to FacebookShare to Pinterest
Labels: Chairs, Thrifty Thursday, Vintage Finds
LYNDA QUINTERO-DAVIDS
Hello and Welcome to Focal Point Styling! I'm Lynda - sharing simple solutions to style & organize your home, fashion & decor trends, savvy shopping tips, market events, plus local love from the places I've experienced. I started this blog back in late 2009 when I lived in Miami. In 2011, I moved to Phoenix, AZ and rented a house until late 2014, when I relocated back east to the Triad in North Carolina - Join me on my journey!