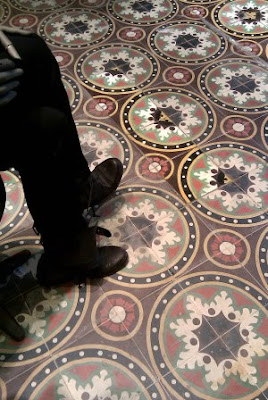 After working in retail for so many years, I've developed a fondness and appreciation for unique and innovative store design. Although some stores save on their general expenses by being void of character in their design, one store out there is not: ALLSAINTS. Allsaints Spitalfields is a trendy fashion retailer, from Spitalfields UK, aiming to fill the gap of high fashion at mid prices. (READ ABOUT SPITALFIELDS HERE) 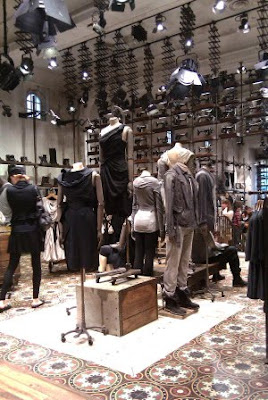 Originally launched in 1994 as a menswear wholesale line, it later developed women's and accessories lines. The store I stepped into on South Beach also carries children's clothing. What makes this store hit the mark as being 'upcycled'? It's because of its unique repetitive use of one simple (symbolic) item: VINTAGE SEWING MACHINES. Not just one here and there on display... but WALLS OF vintage sewing machines... 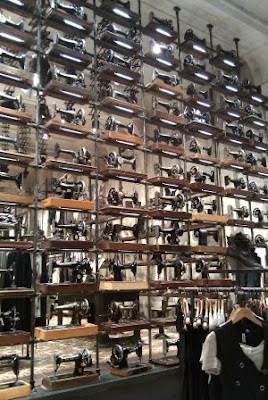 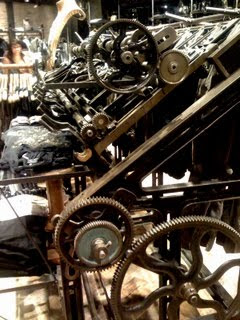 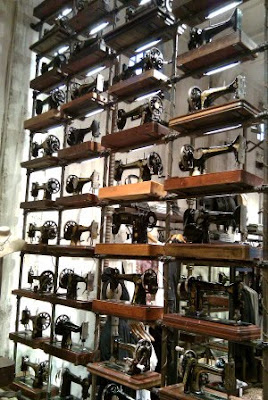 This presentation of vintage machinery is combined with distressed walls laced with decoupage treatments, a goat skull gridded focal point wall behind the registers, restored Moroccan tile and reclaimed wood floors, and accordion theater light fixtures suspended from 14' soaring ceilings, highlighting their uniquely upcycled machine-like fixtures... all setting the stage for their rocked out apparel to perform in. 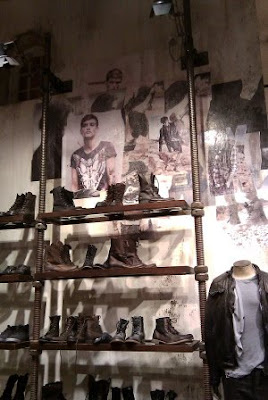 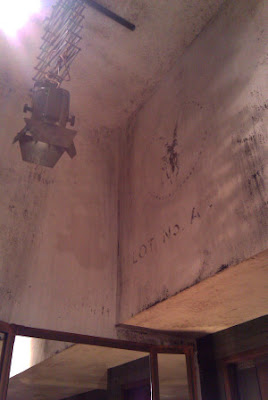 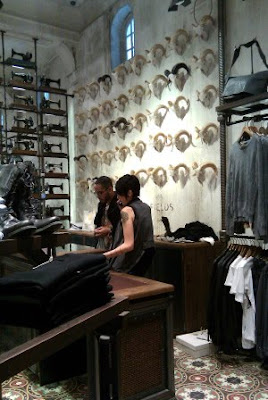 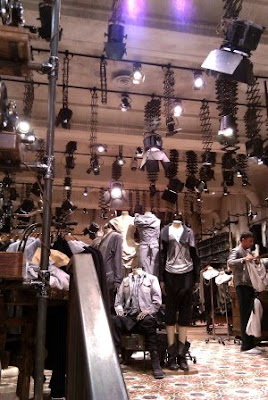 From its' inception, Allsaints has had a long standing history of collaborating with and supporting some of the top names in the music industry like U2, Stereophonics, Robbie Williams, and Kings of Leon. (read more here) As of today, Allsaints has built a portfolio of 25 standalone stores and 34 concessions in key cities nationwide, including three international stores in the mix. 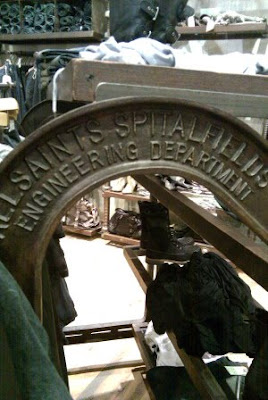 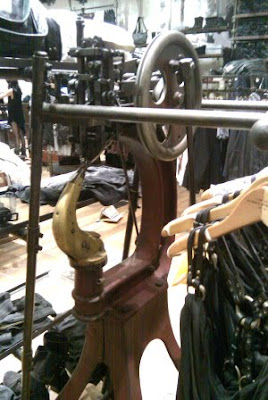 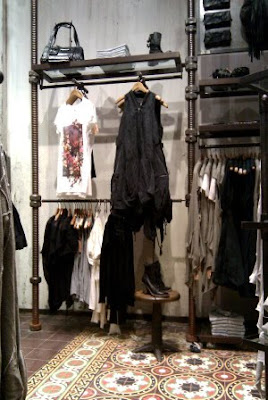 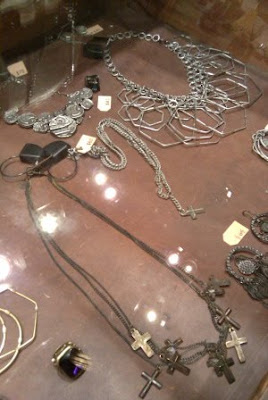 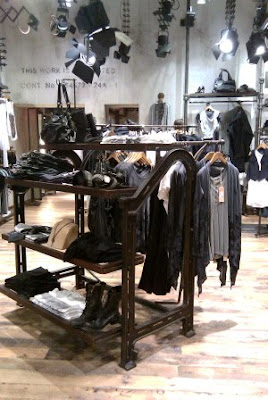 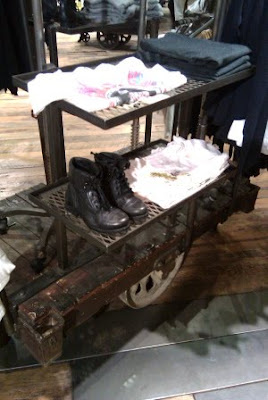 Allsaints states they "stand for being a brand leader". Their mission is to "create a brand that blends cultural, fashion and music into a potent formula of desirable clothing that expresses individuality and attitude." That kind of FOCUS and attention to detail has definitely struck the right cord with their trendy location at 910 Lincoln Road - South Beach...especially with so many retailers closing under performing stores (read more here) 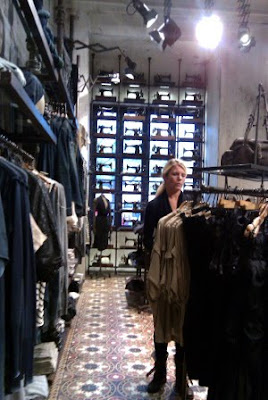 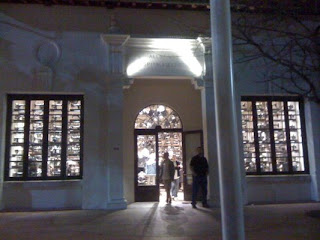 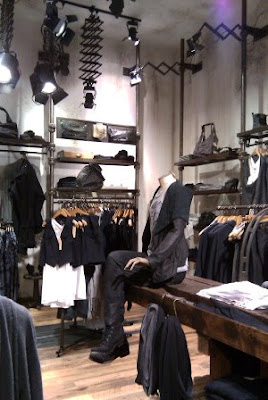 And before you go shrugging off this store as some mean-spirited punk-goth inspired environment... think again. ALL those vintage sewing machines featured are making a statement. Did you know the original inventor of the sewing machine was an ENGLISHMAN named THOMAS SAINT? And before sewing machines were invented, textiles were sewn with needles made of BONES and animal HORNS (hence the goat skull focal point wall). 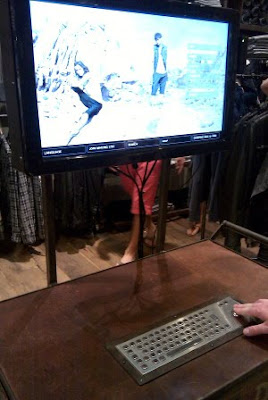 Past & Present come together here at this leather bond desktop,
with its' stainless steel keyboard & rollerball mouse.

The first possible patent connected to mechanical sewing was a 1755 British patent issued to German, Charles Weisenthal. However, the English inventor and cabinet maker, THOMAS SAINT was issued the first patent for a complete machine for sewing in 1790. It is not known if Saint actually built a working prototype of his invention. The patent describes an awl that punched a hole in leather and passed a needle through the hole. A later reproduction of Saint's invention based on his patent drawings did not work. (READ MORE HERE) After the sewing machine was invented, the ready-made clothing industry took off. (READ MORE HERE) 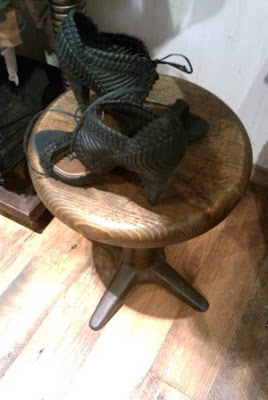 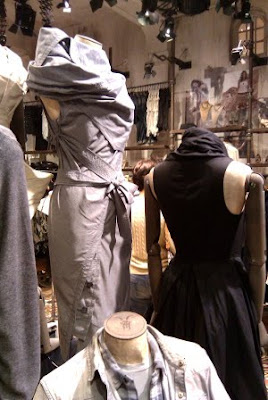 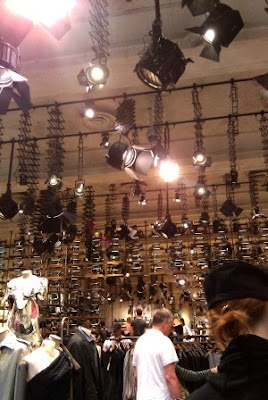 As I read about Spitalfields,
"It pays to look beyond the obvious"...
and when it comes to ALLSAINTS, it's no diferent.

Have you been in an Allsaints store?
What do you think of it?

Posted by LYNDA QUINTERO-DAVIDS at 10:07 AM

Email ThisBlogThis!Share to TwitterShare to FacebookShare to Pinterest
Labels: Allsaints, Lynda Quintero-Davids, merchandising, Retail Industry, Store Design, store tour, Thrifty Thursday, Upcycling, Visual Merchandising
LYNDA QUINTERO-DAVIDS
Hello and Welcome to Focal Point Styling! I'm Lynda - sharing simple solutions to style & organize your home, fashion & decor trends, savvy shopping tips, market events, plus local love from the places I've experienced. I started this blog back in late 2009 when I lived in Miami. In 2011, I moved to Phoenix, AZ and rented a house until late 2014, when I relocated back east to the Triad in North Carolina - Join me on my journey!